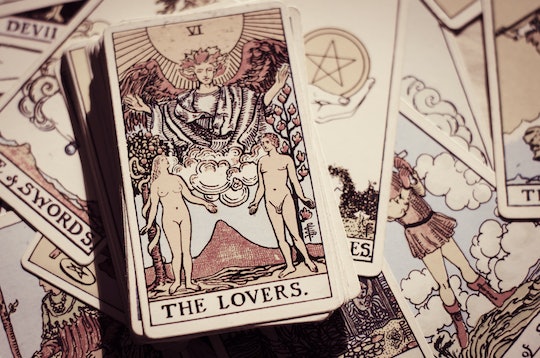 Here's Which Tarot Card Represents You & Your Character The Best

When I was in eighth grade, I was obsessed with the movie The Craft, as all of the best rebellious teens were. I wore a million necklaces and tried to call the corners with my girlfriends in my oversized closet that was plastered with Trent Reznor TeenBop (the super emo section) pictures. My favorite bit of witchy rebellion was my deck of tarot cards purchased at the local Waldenbooks. And to be honest, I never put them down. Even if it's all artful hogwash, they're pretty and compelling. I often wondered, and still do — which tarot card represents me? Because it's the clutch part of the process.

More Like This
Lightning Crotch Can Actually Tell You These 7 Things About Your Pregnancy
Tax Day Is Almost Here: Everything You Need To Know About The New Child Tax Credit
16 Star Wars Quotes About Love That'll Make You Feel All The Feels
Apple Card Family: How It Works & What Your Kids Can Learn

In tarot reading, it's important to note that there are two primary groups of tarot cards: major arcana and minor arcana. The major arcana are used to determine primary life purposes, pathways, and personalities, and the minor arcana are used to divine the quotidian experiences in your day to day life that, while important, are so mutable that they can't possibly represent a person on the whole, according to The Ultimate Guide to Tarot Reading. To that end, the tarot card that represents you will be from the major arcana, and derived from personality traits and the driving motivations behind your major life choices.

There are 22 major arcana that range from Death to The Fool, but they're not always as they seem, according to Llewellyn's Complete Book of Tarot. Not only does it depend on how they're drawn, but also who is doing the drawing. Are you more literal? Do you delight in satire? That could change the meaning of your cards.