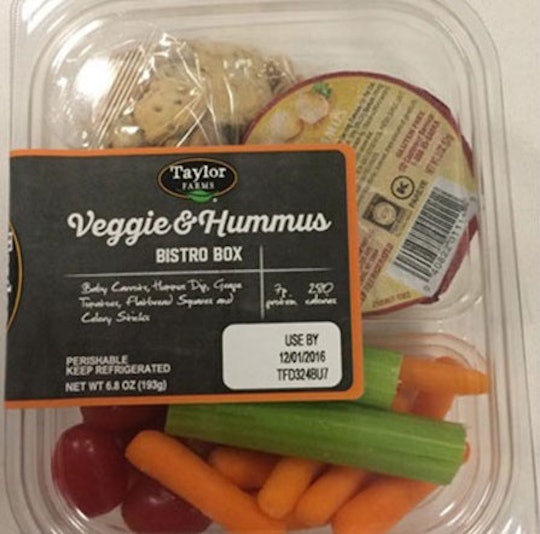 Which Taylor Farms Veggie Products Were Recalled? Check For These Veggie & Hummus Boxes

Hopefully you've ditched your Sabra hummus by now, seeing as all tubs marked with a Jan. 23, 2017 "best before" could likely be contaminated with listeria. Unfortunately, there are a few additional products to be wary of — ones that don't don the "Sabra" name so explicitly. But which Taylor Farms' veggie products were recalled, exactly? The FDA released that Taylor Farms' Veggie & Hummus Bistro Box as well as Schnucks' Vegetable and Hummus Snack Tray are being voluntarily recalled due to potential listeria contamination in the Sabra hummus dips that they each contain.

The products in question are pre-packaged, grab-and-go looking snack boxes. Both pre-wrapped, they each include hummus dip, baby carrots, grape tomatoes, flatbread crackers, and celery sticks. The hummus included was produced by, you guessed it, Sabra. The FDA clarifies that all Taylor Farms Bistro Boxes should be tossed if they have a Nov. 11, 2016 to Dec. 1, 2016 use-by date; Schnucks Snack Trays with a Nov. 18, 2016 to a Nov. 23, 2016 use-by should be tossed out as well.

Listeria outbreaks, though seemingly common, should not be taken likely. The CDC warns that listeria causes listeriosis, which "primarily affects older adults, pregnant women, newborns, and adults with weakened immune systems." Symptoms of listeriosis include "fever and muscle aches, sometimes preceded by diarrhea or other gastrointestinal symptoms." Antibiotics treat listeriosis, but the illness cannot always be cured, the implications of which are life-threatening. Of the 1600 estimated listeriosis illness victims each year, about 260 people die from it.

The following images show which exact products consumers should look out for, throw out, and avoid:

Though the contaminant bacteria was found at a Sabra plant but not in the actual products themselves, it's definitely better to be safe than sorry. A statement posted on Sabra's website about the recall assures that, after finding the bacteria, facilities underwent a "thorough and extensive factory-wide cleaning and sanitation procedure." CEO Shali Shalit Shoval also mentioned, albeit vaguely, that the company will "continue to work very closely with internal and external food safety experts to identify any additional steps we can take to even further enhance our efforts."

Thankfully, no illnesses have been reported as being caused by Sabra's listeria outbreak thus far. It might be smart, though, to hold off on the hummus dip this season, even if it is an easy, pre-Thanksgiving appetizer. If Sabra's your favorite brand, keep an eagle eye out, because nobody wants to spend their holiday sick.

Correction: A previous version of this article called the recalled product "Sabra veggie products," but Sabra does not manufacture veggie products. The recalled veggie & hummus boxes were manufactured by Taylor Farms, and they were recalled because they contained Sabra's voluntarily recalled hummus. Romper apologizes for the error.