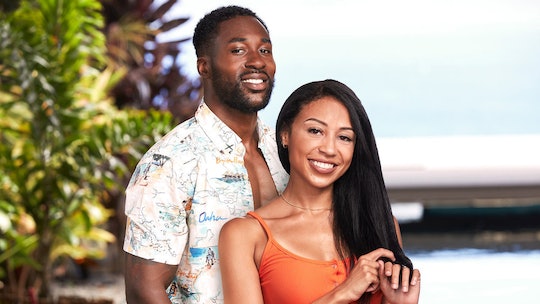 USA network's Temptation Island reboot premiered on Tuesday, Jan. 15 with a bang. The four couples cast on the show have already gone on dates with their potential love interests, causing tempers to flare and jealousy issues to crop up. Amid all of this drama, some fans want to know which Temptation Island couple has the strongest connection. Romper talked to relationship expert and matchmaker Tracy McMillan to find out, and the conversation also touched on the unique dating challenges millennials often face.

Some viewers might not recall the original Temptation Island that first premiered in 2001. The series — which ended in 2003 — was designed to test the bonds of four couples who have reached a make it or break it point in their relationship.

Writer Kristen Baldwin summed up the series' premise best in a 2001 article for Entertainment Weekly, writing:

Four couples at a 'crossroads' in their relationship travel to a pair of tropical resorts off the coast of Belize — one is stocked with 13 absurdly attractive female singles, the other houses 13 unattached stud muffins. After two weeks of high stakes mixing and mingling, the previously committed couples decide if they want to stay with their significant other or upgrade to a newer, presumably hotter model.

Although 17 years have passed since the first episode, a lot hasn't changed in the 2019 reboot. The show's premise is exactly the same, all the way down to the tropical location. But one thing is noticeably different this time around — the revamped version features millennials who started their relationships amid the rise of social media.

McMillan, author of Why You're Not Married Yet and I Love you and I'm Leaving You Anyway, to name a few titles, spoke to Romper in a phone interview about the show's couples and how Temptation Island mimics the current dating scene for millennials.

Comparing the show to current times, McMillan explains: "I would say that social media — or the internet — is one big Temptation Island. Anything you want, you can find." McMillan also warns that temptation can sneak up on you, especially if you're someone who is constantly scrolling through Instagram. She tells Romper, "Another part of it is that — it doesn’t constitute temptation until you are in a weak moment or, let’s say there’s trouble in a relationship." She continues, "So, what didn’t constitute a temptation two months ago can become one when you’re five years into a relationship. Suddenly: 'Oh, hey, maybe that’s starting to look interesting.' And it’s still there right where you left it — on Instagram!" Translation: Stay away from the DMs if your relationship is going through a rough patch.

Then there's the topic of age, which is important to bring up because all of the Temptation Island couples are under 40. When you combine immaturity with a buffet of choices, it can easily breed jealousy. But McMillan points out that jealousy — especially in the context of reality TV — is pretty normal.

"To me, it’s perfectly normal that they’re doing things out of jealously and that they’re afraid to see the person they love with someone else," she tells Romper.

As for the Temptation Island couples who are on the path to lasting commitment? McMillan acknowledges that's a tough one to answer, stating, "All of them are on the show because they know that something is going on in their relationship." She continues, "So, right there, you’ve got a group of people who understand there’s something going on and that they’re going to find out what it is. I think some of these couples might break up and get back together. This experience is either going to break them up, but then they will get back together potentially."

But sometimes breaking up and getting back together is a good sign, which McMillan believes is the case for 25 year olds Javen and Shari.

"I’d say my number one candidate for that is Javen and Shari. But I think they’re deeply connected, and I think she really loves him and he really loves her," she reveals. "And they’re young and they’ve been together a long time but that I could definitely see them breaking up for a period of time and then coming back together. So, that’s one thing."

Although it remains to be seen who will make it through this experiment intact, one thing is for certain — these couples are about to to do a lot of soul searching.

"I think it takes a lot of maturity to understand who is a right or a good partner for you," McMillan tells Romper. "What all of the couples are dealing with is they’re not sure who they are, so they don’t know who is the right partner for them. And everybody is on their own journey if that makes sense."

You can catch each couple's journey on Tuesdays at 10 p.m. ET on the USA network.