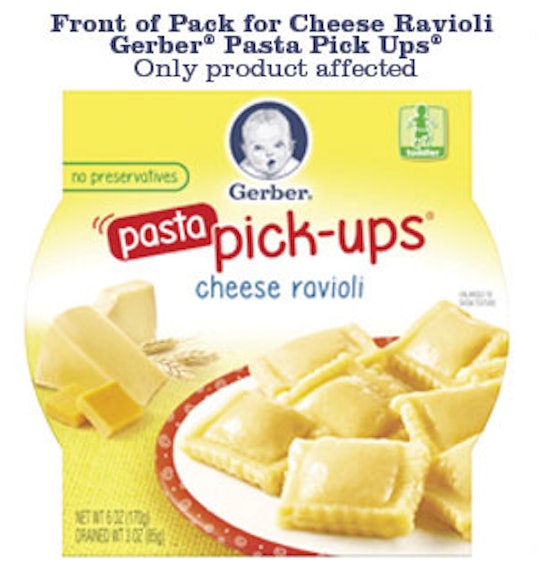 Which Toddler Food Did Gerber Recall?

Your baby learning how to eat on his or her own is a great mark of development. But way too often, parents have to worry about baby food companies announcing recalls of their child's favorite food. On Wednesday, Gerber announced it was voluntarily recalling a food product aimed at toddlers. So which toddler food did Gerber recall?

Gerber is recalling it's Cheese Ravioli Pasta Pick-Ups because the egg allergen is missing from the “Contains” statement. Although eggs are still listed on the ingredients list, Gerber chose to remove the product from stores everywhere.

A spokesperson for Gerber told Romper that they have been working quickly to alert parents about the recalled product, and that a consumer alerted them to the mistake.

For those of you who may have a box (or five) of the ravioli but aren't sure if it's affected, check the UPC code of the product, which is 159070. According to the FDA, the product was only distributed in the United States.

A letter on the Gerber website assured parents that other Gerber products, including other varieties of the Pasta Pick-Ups line, are correctly labeled. No illnesses have been reported, according to the FDA.

So if you have five boxes of Gerber's Sweet Potato and Cheese Ravioli, you're good, and not just because it's not being recalled but also because your toddler must have a pretty refined palette.

If your toddler isn't allergic to eggs, this recall doesn't affect you. But if he or she is, you need to be cautious. Egg allergies are fairly common in babies and toddlers. There are many symptoms of an allergic reaction to eggs, according to Kids Health. These include breathing problems, itching around the mouth, a runny nose, diarrhea, nausea, vomiting, hives, and low blood pressure.

Kids enjoy the ravioli and, according to reviews, the food is great for toddlers who are just learning how to pick up food and eat by themselves. But on the Gerber website's page for the cheese ravioli product, one parent named Anne wrote a review 10 days ago complaining that she almost fed her child — who has an egg allergy — the mislabeled product:

The allergen details at the end of the ingredients (where known allergens are listed in bold letters) does not indicate egg, however within the list of ingredients, this product clearly contains egg. I have almost given this to my toddler who is severely allergic to egg.

Gerber's spokesperson said that parents who are affected by the recall, they can call Gerber's Parents Resource Center at 1-800-510-7494 for a replacement coupon.

Just this past month, parents in Canada had to deal with the recall of PC Organics baby food pouches, which is manufactured by Loblaw Companies. The pouches were made with too much water, which could grow into a dangerous bacteria that can cause nausea, vomiting, dizziness, blurred vision, dry mouth, respiratory failure and paralysis, which sounds pretty freaking scary.

The symptoms are so severe, the FDA decided to warn parents in the U.S. who may have bought the products while in Canada.

The number of food recalls has increased over the past few years. But that actually may not be a bad thing: the reason why there are more recalls is because food regulations have gotten more strict, according to Food Safety Magazine. So try not to worry (I know, that's hard), and just enjoy watching your kid play with his or her food.