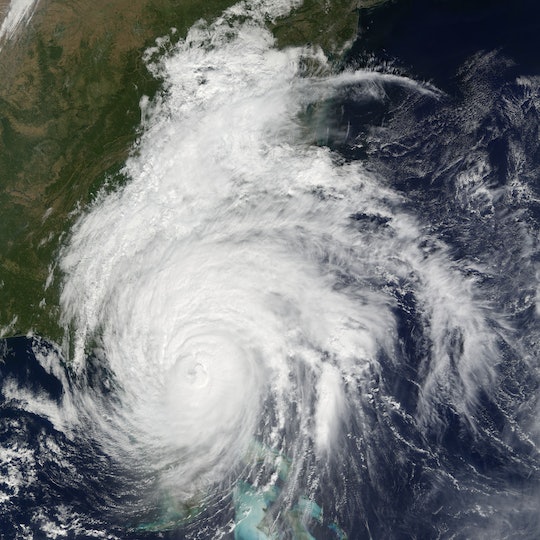 Which US Cities Were Most Devastated By Hurricane Matthew? It Badly Damaged 5 States

After wiping out entire coastal communities in Haiti, Hurricane Matthew raged its away up the Florida coast before finally making landfall in McClellanville, South Carolina on Saturday morning. The storm, originally classified as a Category 5 storm, had weakened substantially by the time it made landfall in the United States — Hurricane Matthew was just a Category 1 by Saturday morning. Despite its downgraded status, Matthew has already been blamed for at least 24 U.S. deaths. Which U.S. cities were hit hardest by Hurricane Matthew? The wake of its damage has been wide and deadly.

Even though Hurricane Matthew didn't officially make landfall until Saturday morning in the Carolinas, it has crawled up the southeastern coast of the country since Thursday. While early predictions put Florida directly in the path of the storm, resulting in massive evacuations throughout the state, the hurricane turned just eastward enough to spare the Sunshine State from a direct hit — but not without leaving a million people without power and at least five people dead. While the storm made landfall in South Carolina, Hurricane Matthew's effects are being felt the most throughout cities in North Carolina, as the threat of additional life-threatening flooding looms as the storm spins off the coast in the Atlantic.

Hurricane Matthew's death toll has climbed to as least 24 deaths in the United States, according to ABC News: six in Florida, four in Georgia, three in South Carolina, 10 in North Carolina, and one in Virginia. In a press conference Monday morning, North Carolina Gov. Pat McCrory said that number is expected to rise as Matthew could still pack a devastating punch to inland residents along eastern North Carolina: Severe flooding is expected as rivers will continue to rise over the next two days. At his press conference, McCrory noted there have already been more than 1,400 water rescues in North Carolina — and that number is also expected to rise.

The entire town of Princeville, just over 70 miles east of the capital Raleigh, was ordered to evacuate on Sunday — all 2,000 residents — as the storm surge there rose to as much as 17 feet along the Tar River. In 1999, Hurricane Floyd had all but destroyed the community of Princeville. Meanwhile, 100 miles south of the capital, a levee broke in Lumberton, leaving as many as 1,500 people stranded: People have been forced to climb onto roofs of their homes, due to the height of the floodwaters as rescue crews mobilize to perform rescues in Lumberton by both helicopter and boat.

Hurricane Matthew could be responsible for as much as $60 billion in damage, making it the third most expensive storm in the United States, according to predictions at CNN; so far, initial numbers from CoreLogic put Hurricane Matthew's economic losses at $4 to $6 billion as of Monday. As flooding continues in North Carolina and relief efforts are underway in five southeastern states, the damage costs are expected to climb substantially.