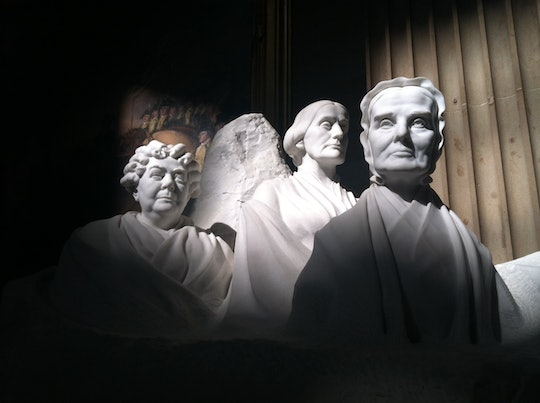 Which Women Will Be On The New $10 Bill? They're All Civil Rights Leaders

Finally acquiescing to widespread public urging to increase diversity in representation on U.S. currency, Secretary of Treasury Jack Lew confirmed Wednesday that the new faces on some of our bills will include both African Americans and women. Who said peer pressure was all bad? Thanks to the efforts of groups like Women on 20s and Girls' Lounge, as well as other activists, venerated abolitionist and former slave Harriet Tubman will replace the noted slave-owning and all-around-racist seventh president Andrew Jackson on the front of the $20 bill. The fact that five suffrage leaders will grace the back of the $10 bill as well almost makes up for the fact that Jackson's image will hang on to the back of the $20, at least for now (boo). So, which women will be on the new $10 bill?

Instead of the current picture of the U.S. Treasury building, "the back of the $10 bill would be replaced with a depiction of a 1913 march in support of women’s right to vote that ended at the building," The New York Times reported. Amid this backdrop, portraits of Lucretia Mott, Sojourner Truth, Elizabeth Cady Stanton, Alice Paul, and Susan B. Anthony will adorn the note. The portrait on the front of the bill will be of Founding Father and first Secretary of the Treasury, Alexander Hamilton, as it is now.

As a feminist and abolitionist, Lucretia Mott helped to form the Philadelphia Anti-Slavery Society in 1833 and is considered one of the founders of the women's rights movement. Sojourner Truth, born a slave in New York, advocated for freed slaves during Reconstruction. Together, Elizabeth Cady Stanton and Susan B. Anthony established the National Woman Suffrage Association in 1869. Alice Paul spent time in prison as a result of her work seeking a voting amendment, and her efforts directly led to the passage of the 19th amendment in 1920.

The move marks the first time that a woman will be featured on U.S. paper currency in more than a century. Understandably, but unfortunately, the designs for Harriet Tubman's $20 bill will likely not be finalized until 2020, and the bill won't go into circulation for up to a decade after that. The redesigns for the $10 bill and the $5 note — which is also getting a makeover and will depict Eleanor Roosevelt, Rev. Dr. Martin Luther King Jr., and African American classical singer Marian Anderson — will also be unveiled in 2020, which, fittingly, is the 100th anniversary of women's gaining the right to vote.

The women chosen for the back of the $10 note showcase the epitome of American strength in the face of adversity and dedication to strongly held beliefs that shaped who we are as a nation. Getting them onto U.S. currency is certainly a step in the right direction of celebrating more facets of the historic American experience. I'm eager for the day, of course, when the women aren't relegated to the flip side of a white man's bill. But for now, this will have to do.