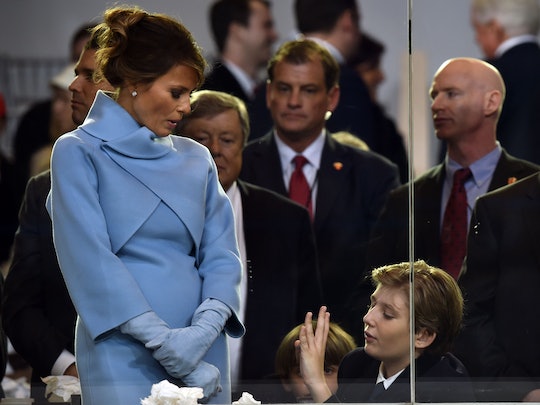 Obviously, President Donald Trump is fair game when it comes to criticism and comedy, and that's good, because people have a lot of feelings about everything from his tiny hands to his dangerous habit of targeting the press. But someone who isn't fair game? Trump's 10-year-old son Barron, who recently found himself on the receiving end of some unkind tweets. On Tuesday, the White House issued a statement saying that Barron Trump deserves privacy like the children of presidents past. It's a wise tradition, and one we should respect.

The Office of the Press Secretary said, in a statement,

It is a longstanding tradition that the children of Presidents are afforded the opportunity to grow up outside of the political spotlight. The White House fully expects this tradition to continue.

The statement seemed motivated in part by furor over one particular tweet from Katie Rich, a Saturday Night Live writer, who wrote, during the inauguration ceremony, "Barron will be this country’s first homeschool shooter." Obviously, not cool, given that Barron is a child, and never asked to be thrust into the public eye.

Many were quick to rush to Barron's defense, including former first daughter Chelsea Clinton. Clinton knows his situation very well, having grown up in the public eye herself, and having received her fair share of bullying, like when Rush Limbaugh compared her to a dog when she was only 12. Clinton pointed out in a tweet that Barron "deserves the chance every child does-to be a kid."

Kudos to Clinton for also pointing out that we shouldn't take offense at the bullying of a president's child while turning a blind eye to the ways in which other children might be adversely affected by the administration's policies.

After her offensive tweet, Rich was suspended indefinitely from Saturday Night Live, although in her defense, she quickly and sincerely apologized, leaving many on Twitter to respond to the news of her suspension by pointing out that Trump himself has said plenty of offensive things without apologizing, and has only been rewarded for them.

And with all of this said, obviously Trump's fully grown children are a different story. Since Ivanka, Eric, and Donald Jr. all played a big part in getting their father elected, and have done some ethically dubious mixing of business and politics, they're fair game too, and we should absolutely call them out. (Tiffany, poor, forgotten Tiffany, is a bit more of a grey area.)

So let's all cut Barron some slack over the next few years. After all, there are plenty of other jokes to be made about the Trump administration.