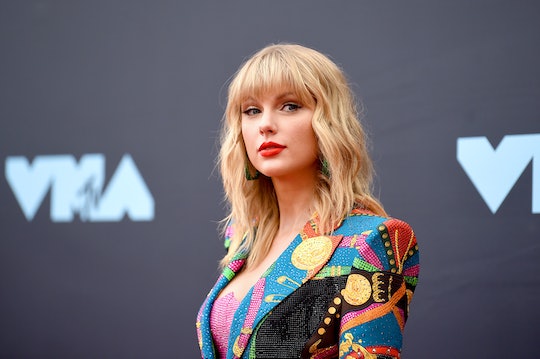 While accepting her award for Video of the Year at Monday's MTV Video Music Awards (VMA), one pop star put the White House on blast for its failure to acknowledge a popular petition calling on the U.S. Senate to support The Equality Act. But the White House's response to Taylor Swift's VMA speech claimed the legislation — which would prohibit discrimination on the basis of sex, sexual orientation, and gender identity — contains "poison pills."

"The Trump Administration absolutely opposes discrimination of any kind and supports the equal treatment of all," White House spokesman Judd Deere said in a statement, USA Today reported. "However, the House-passed bill in its current form is filled with poison pills that threaten to undermine parental and conscience rights."

Earlier in the year, Swift had used her single "You Need To Calm Down" to promote both a pro-LGBTQ message and The Equality Act. In fact, in the single's music video, the pop star launched and promoted a Change.org petition urging Congress to support The Equality Act.

"In this video, several points were made," MTV reported Swift said Monday while accepting the Video of the Year award for "You Need To Calm Down." "So you voting for this video means that you want a world where we're all treated equally under the law, regardless of who we love, regardless of how we identify."

"At the end of this video there was a petition — and there still is a petition — for The Equality Act, which basically just says we all deserve equal rights under the law," the singer continued. "I want to thank everyone who signed that petition because it now has half a million signatures, which is five times the amount that it would need to warrant a response from the White House." Swift then made a point of checking her watch on stage before moving on to thank her cast and team.

Speaking to Fox News on Tuesday, White House adviser Kellyanne Conway also appeared to dismiss Swift's criticism of the White House. "She's welcome to her opinion," Conway said, according to The Hill. "The president and the White House support equality. We don't support pieces of legislation that have poison pills in it that can harm other people... When something is named something it's not always truly that and so we have to look at the legislation."

Although passed by the Democrat-controlled House of Representatives in May, The Equality Act has so far been blocked from coming up for a vote in the Republican-controlled Senate. According to a summary of the bill provided by Congress, The Equality Act would prohibit discrimination "based on sex, sexual orientation, and gender identity in areas including public accommodations and facilities, education, federal funding, employment, housing, credit, and the jury system."

Organizations like Human Rights Campaign and celebrities like talk show host Ellen DeGeneres, actor George Takei, and Queer Eye's Antoni Porowski have come forward to applaud Swift's public promotion of The Equality Act at Monday's VMA. And while the White House has remained unwilling to support the bill, Swift's VMA speech appears to have renewed interest in her Change.org petition. At the time this article was published, Swift's petition had garnered more than 523,000 signatures.

More Like This
H.E.R Is Becoming A Disney Princess As Belle In New Beauty & The Beast TV Special
Obama Also Can't Stop Listening To Beyoncé’s Song Of The Summer "Break My Soul"
Dr. Jill Biden Just Delivered Some Frank, But Powerful, Advice On Motherhood
Breonna Taylor's Mom Spoke Out About The Four Officers Arrested In Her Daughter’s Death