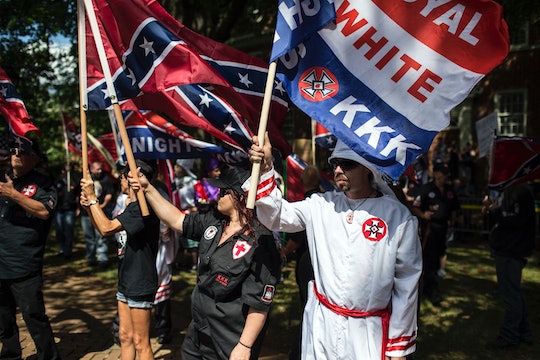 White Parents, This Is On Us

The gross demonstration of hate at the white supremacist rally in Charlottesville this past weekend, culminating in the death of a peaceful protester, filled me with rage, but that wasn’t all. I’ve been a feminist activist for over a decade and a vocal opponent of Trump since day one, and yet here is the ugly truth: I heard what was happening on Saturday and opted not to turn on the news at first.

I was busy. I had things to do.

When I eventually did and saw the reality I’d deferred for a few hours, I was struck by the violence, but I was also horrified that I’d heard about it, and somehow this hadn’t felt urgent to me. I’d chosen to be complacent, even if only temporarily. And suddenly — finally? — I started to worry about the ways I might be passing that complacency on to my kids.

I’m not alone in it. I know I’m not. A lot of other folks also opted not to take this incident in, the way they don’t take in the everyday racism generally. You know them: it’s your (white) aunt who refuses to watch the news because it’s “too depressing.” It’s your (white) friends who only consider predominantly white daycares and preschools. And yes, it’s white you, when you purchase books and movies that are bereft of diverse faces.

Fellow white parents, it’s time. We’ve got to quit this. The passivity has gone on long enough. I look at the photos of those Klansmen in Charlottesville and think, those are someone’s kids. Someone raised the boys who became those men — and I don’t want to be anything like those folks.

Let’s start today. Let’s for once show some leadership in fighting the systemic racism that plagues our country, starting not just with a deep examination of ourselves (which is entirely in order), but careful consideration of how we are raising the next generation of white people and who we want them to be.

I didn’t immediately turn on the news this weekend because I had the luxury of indulging the lie that racism didn’t apply to me, at least not right then, when I had diapers to change, laundry to wash, and dinner to cook. (Note that parents of color have to do all of those things, too, but they can’t afford to look away.) If you happened not to be born a person of color in this country, it’s all too easy to disconnect — whether out of apathy, burnout, self-involvement, or denial.

We have looked the other way. And if you think our children haven’t seen us do it, you’re wrong.

The fact is, we don’t have to own Klan hoods to treat our fellow citizens like their lives and especially their suffering aren’t important. Every time we’ve held our tongues around racist family members, deleted a racist “joke” email instead of replying and calling out the sender’s racism, or turned a blind eye to a racist act, we helped pave the path that led to Charlottesville. It’s embarrassing, it’s painful, and it’s the damn truth.

It is also deeply embarrassing that it took an actual neo-Nazi rally and murder to spark widespread public outrage from white folks. It’s embarrassing that it took the Klan reasserting itself on the national stage to prompt me to write this post. We should’ve been angry long before now and been marching for the rights of our brothers and sisters of color all the while. Sure, many of us haven’t committed "active racism," which really doesn't feel like a very worthwhile distinction any more. Many of us have even protested in an effort to show solidarity. But we have also been silent when we shouldn’t have been. We have looked the other way. And if you think our children haven’t seen us do it, you’re wrong.

So far, the America they see us being basically OK with isn’t just home to blatant acts of racial violence, like what happened in Charlottesville, like the murder of nine innocent people in a Charleston church, like Trayvon Martin, Philando Castile, Alton Sterling, Sandra Bland, Tamir Rice, and many others killed by police officers for behavior that wouldn’t begin to arouse suspicion if they were white. Like trans people of color, who are murdered all the time. Our justice system incarcerates black people at staggeringly higher rates than white people. Our so-called democracy proactively engages in racially motivated voter suppression, and is filled with systems that perpetuate housing, employment, and educational discrimination.

We have to actively listen to people of color’s experiences and needs, and for god’s sake we have to stop making it about us.

Every time we do that, we are doing much more than tuning out. We’re engaging in the passive racism that brought the country to this point, and we’re sidestepping the opportunity to model what an ally looks like. That’s how it all continues.

As parents, we can help prevent the youngest generations from peddling in hate or staying silent in the face institutional racism. But in order to do so, we must first confront the role we’ve played in enabling racism and commit to not turning away or tuning out ever again.

So what do we want our kids to see instead? And how do we make sure they aren’t as complacent as we have been? First, we have to reject the notion that racism doesn’t involve or apply to us, and educate ourselves on the many ways it works. We have to actively listen to people of color’s experiences and needs, and for god’s sake we have to stop making it about us.

Then we have to stop “protecting” our kids from the reality of racism, especially passive racism. This means both initiating age-appropriate conversations about race and making sure they see us call out racism when we witness it. As much as we would love to protect our kids from all things hateful and scary, sugarcoating or skirting the issue is a disservice to the people of color they are growing up alongside, to society at large, and to them. They cannot become people who fight evil if they don’t know what it looks like.

We have to tell and show them: it’s the white parents who only want their children playing with other white kids, the dearth of black and brown faces on TV, the mean-spirited jokes — and worse, the “but it wasn’t mean-spirited” jokes — directed at people who speak with foreign accents. Open, honest dialogue about race and racism is essential our homes, especially during situations that might trigger us into complacency — for example, when we fear we might “say the wrong thing,” so instead say, and do, nothing at all.

We also have to talk to them about privilege and responsibility. Our white skin — and theirs — gives us the option of viewing racism from afar, of keeping our distance. That doesn’t mean we can afford to take that option. The privilege implicit in our whiteness demands that we step up and speak out. In our actions even more than our words, we must convey to our children that the burden of fixing racism should not rest solely on the shoulders of people of color. In fact, it shouldn’t rest on people of color at all.

I truly believe we can make this a better, more inclusive country but we (white people) have to do the hard work to get there. Let’s hurry. We have a lot of catching up to do.