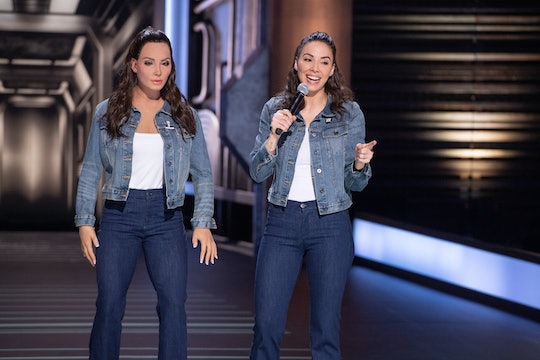 Whitney Cummings Wants Her Sex Robot To Replace Her

After bringing you shows like 2 Broke Girls, the Roseanne reboot, and Amazon’s new series, Good People, comedian Whitney Cummings is getting back on stage in her new Netflix stand-up special, Can I Touch It?. In it, the comedian talks about the #MeToo movement, sexual harassment, and how lipstick is the perfect deterrent against an attacker. But while joking about the future of sex, Whitney Cummings reveals a robot of herself, and breaks down why sex robots are the next big thing.

About halfway into her hour-long special, Cummings begins envisioning a future where sex robots will give women a much-needed break. “I’m a very busy person,” she jokes. “I would love for the day to come when I could be like, ‘Babe, I’m very tired. Please go f*ck R2-D2. Mama’s gotta bang out some emails.’”

She also goes on to talk about people’s reluctance to accept sex robots, and why there’s no reason to be afraid. “People are very stressed out about sex robots,” says Cummings. “I have yet to hear an argument against them that I buy. Everyone’s worried, like, ‘Aren’t you worried they’ll replace human women?’ If you’re worried about being replaced by a giant piece of plastic, you’re not bringing that much to the table in the first place. I need you to watch a TED Talk.”

After pointing out all the glorious benefits of sex robots, including how you can use them to teach teenage boys about consent before they date real women, Cummings brings out Robot Whitney. She’s the spitting image of the comedian, rocking the same hairstyle, makeup, and outfit. “I don’t know if she looks really human or if I’ve just always looked like a robot,” Cummings says. But Robot Whitney has jokes too. When Cummings tells her to say hello, the robot yells “Hi hookers,” and tells the audience to call her “Bear Claw.”

Cummings reveals that while others might fear the day robots replace humans, she has no problem letting Bear Claw do all her heavy lifting. “Every woman that I know says ‘I need a double, I need a clone,’” she jokes. “I would love for her to replace me. I would love for her to get good at stand-up and tour all over the country so I can stay home and drink rosé all day.”

Sex robots aren’t something you hear about much, let alone see on TV. But in an interview with The Daily Beast’s The Last Laugh podcast, Cummings told host Matt Wilstein she wanted to highlight this emerging tech and shock the audience at the same time. “I was like, what can I do in this special that I haven’t done before,” said Cummings. “Last special I talked about egg freezing, stuff that’s on the horizon and why isn’t anybody talking about it? Why aren’t we talking about the fact that sex robots are being made and in the next 20 years, they’re going to be like iPhones and everybody’s going to have one?”

After hearing her list of sex robot benefits, including the fact that you could program it to make guacamole, I think Cummings may really be onto something. You can catch her entire special, Can I Touch It? on Netflix.