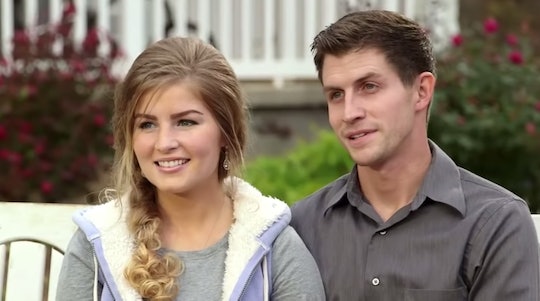 Few things in life compare to the bond shared by sisters. Sure, they know how to get on each other's nerves like no one's business. And they have the potential to fight like cats and dogs. But when it comes down to it, sisters would probably do anything for one another. And although the Bates family is a pretty tight-nit bunch, Whitey and Erin Bates' joint bump photo is the ultimate in sister bonding.

If you're not familiar with the Bates family, allow me to introduce you. Gil and Kelly Jo Bates live in Tennessee, and like their friends, the Duggars, the ultra-conservative couple has a whopping 19 children. Oh, and the Bates also have their own reality TV show called Bringing Up Bates. One of their adult daughters, Erin, is expecting her fourth child with husband Chad Paine, according to People. At the same time, Gil and Kelly Jo's son, Zach, is expecting his third child with wife Whitney Bates, according to Us Weekly.

Sure, Erin and Whitney might not technically be sisters — merely sisters-in-law — but they have grown remarkably close through the years since Whitney and Zach starting courting. Their bond was taken to the next level when the Bates women announced they were both pregnant — and with due dates practically on top of each other, Knox News reported. Whitney is due in November and Erin is due in December.

On Friday, Oct. 11, the Bringing Up Bates sisters took to Instagram to share a photo of their third-trimester bumps. "How fun to be bumping with my sister-‘n-law @zachnwhitbates," Whitney captioned the photo of herself and Erin simply glowing with their hands resting on their bumps.

It was in July that both expecting mamas revealed via Instagram they were having baby girls, according to Hollywood Life. Both Bates women also announced the names that had chosen for their daughters. "It’s raining GIRLS! " Erin declared. "We are already so in love with Holland Grace, due to arrive in December! I’m so grateful to be in this journey with my sister-‘n-law @zachnwhitbates."

Meanwhile, Whitney wrote, "Our baby girl, Khloé Eileen is due in November and my sweet niece will be here in December!!! We are overwhelmed with the support we have received from people on social media and thank everyone for their kind words and prayers. These two girls are already so loved and cherished by their older brothers and sisters. They can’t wait to meet them both and shower them with hugs and kisses!"

Seriously, though. It must be so cool to experience pregnancy alongside one of your best friends/family members. The fact that Whitney and Erin are both having baby girls mere weeks apart is so special. If either of them ever needed someone to complain or vent to during their pregnancies, they always had at least one person who could likely say, "OMG, me too."

Personally, I can't wait to finally "meet" Erin and Whitney's daughters — with the help of Instagram. Having cousins so close in age is going to be a blast. And I have a feeling baby Holand and baby Khloé will grow up the best of fiends.