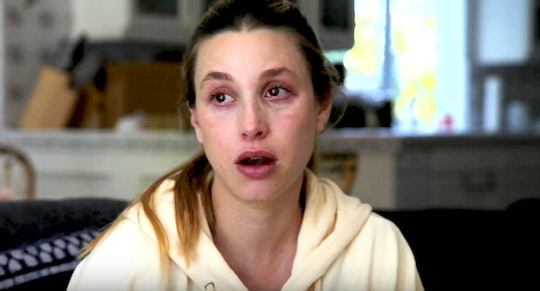 New mothers quickly learn that babies (and motherhood) isn't all that easy after giving birth. There is a lot to know (and a lot to learn) about being a mom that most women don't get a hang of right away, and that is perfectly OK. Take breastfeeding, for example. Former reality star and new mom Whitney Port hasn't had the easiest time with breastfeeding her newborn son, and in a video posted to her YouTube channel, Port's comments about breastfeeding are too real and do such a good job at explaining how trying breastfeeding can be.

Port's son, Sonny, was born almost exactly one month ago, and in the days since, Port has been all about motherhood on her social media platforms. On her YouTube channel, The Hills alum has started her own vlog series with her husband, Tim Rosenman for reality fans to keep up with. The series, called "I love my baby but..." documents Ports feelings on different topics — from pregnancy, to labor, to breastfeeding.

In the most recent video shared to her channel, aptly titled "I love my baby but, breastfeeding" Port touches on how difficult it has been for her and addresses the pressure for women to get breastfeeding right. Her words should be heard, if only for how honest they are and how heartbreakingly emotional Port gets because of it. Port tells the camera in the video:

I totally went into this whole thing with the intention of breastfeeding and I heard that obviously, it doesn't come so easy to a lot of people. Basically, we had the baby and they immediately tell you to start breastfeeding, if thats what you want, but you might not be producing milk yet. I did that and the nurses said that the latch was good, but after 24 hours to 48 hours of doing it, it just started to get so incredibly painful and we came home and I hit a breaking point and said "I can't do this. It feels like someone is slicing my nipples with glass."

With the help of a lactation consultant, according to the video, Port was able to determine that Sonny was "tongue tied" and had part of his tongue clipped by a pediatrician. Still, according to Port, that hasn't made it any better. Port said in the video:

I feel like a lot of people are going to tell me to just have patience and try to do it cause its only been a week. But I just don't know if it's something that is going to get better or not. So that's what I'm anxious about. Like, how much longer am I willing to try it before I give up on it and just pump and give him bottles and be OK with it?

What Port is going through is completely normal. Recent data from the Centers for Disease Control and Prevention show that 80 percent of women, like Port, have breastfed at some point — but only 22 percent of them exclusively breastfed for six months. And Port's son being "tongue tied" is also normal. According to breastfeeding basics, babies who are tongue tied are born with a tight and short frenulum which causes the movement of their tongue to be restricted and can be fixed with a safe and simple clipping procedure.

In spite of how common Port's battle with breastfeeding is, she opened up to the camera about how guilty she feels for "quitting." Port said in the video:

I'm not blaming myself for hurting, but I'm blaming myself for possibly quitting. I don't know if it's something that if I give it one more week it will be better. I just don't want to be regretful that I haven't tried everything.

Port's vlog serves as an important reminder to all new mothers struggling with breastfeeding in the fact that they are not alone.