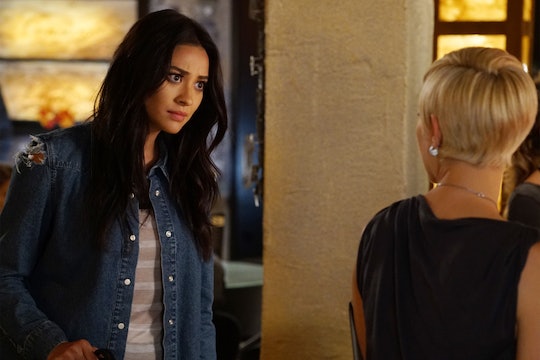 Who Almost Killed Emily On 'Pretty Little Liars'? The Mechanic Revealed A Huge Clue About The Car's Driver

The past is beginning to repeat itself now that Emily, Spencer, Aria, and Hanna are finding themselves back in Rosewood indefinitely. Even though five years have flown by, the women once again being tortured and stalked by Uber A. Oh, yeah — and almost being killed. Emily was the most recent victim when a mysterious car chased her down, almost killing her. On "Burn This," Emily found the car that almost killed her on Pretty Little Liars, and she got even closer to finding out who it belongs to. While she the identity of her attacker remains a mystery, Emily did learn that Melissa Hastings was not behind the attack, and that it was a woman behind the wheel.

Emily was convinced that Melissa had something to do with the attack after finding the broken piece of her suitcase at the abandoned diner. Add that to the semi-shady way Melissa had been acting (and the fact that she jetted back to London this episode), and you've got yourself a pretty good looking suspect. The only problem is the mechanic who runs the shop where Emily found the car said "that wasn't her" when shown a photo of Melissa.

This itty-bitty comment by the shady mechanic gives us a few clues. First of all, it wasn't Melissa, assuming we can trust the mechanic. It also tells us that the driver is probably a woman. The pronoun the mechanic uses hints that while the driver wasn't Melissa, it was a woman, which vastly narrows down our list of suspects. It also seems as if the mechanic is worried about his own safety, since he urgently ushers Emily out of the shop once she begins poking around for answers. So, let's bet that this driver is very dangerous.

So, who can it be? We know that Sara Harvey has been following the women around since they've returned to Rosewood, though she seems to have taken a particular liking to taunting Emily. Then there's the mystery of a twin on Pretty Little Liars that has fans wondering if Sara's twin could be Uber A. So, while it's possible that Sara might not have been the one to almost run down Emily, it could have been her twin. Then again, we could just blame Mona.