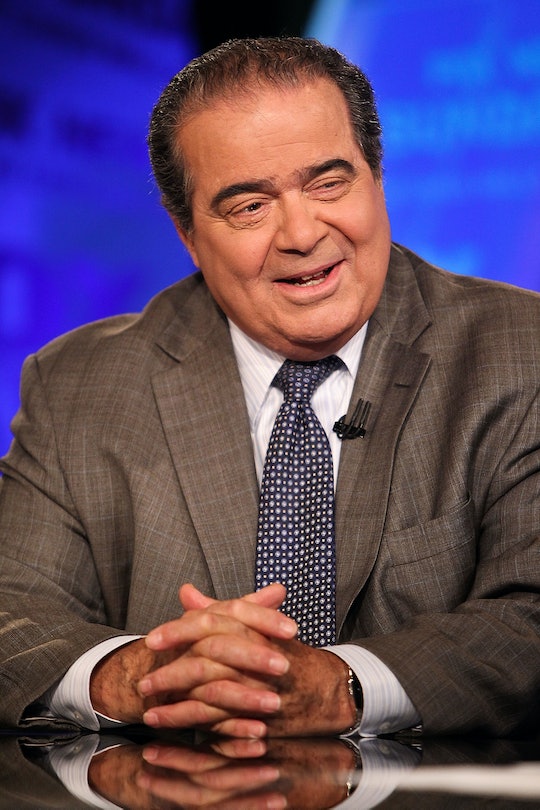 Who Are Antonin Scalia's Kids? The Justice Has 9 Children & 28 Grandchildren

On Saturday, U.S. Supreme Court Justice Antonin Scalia died of natural causes in his sleep at the age of 79 at a West Texas ranch resort. Scalia was a devout Roman Catholic, noted conservative, and ardent defender of the Constitution, having been the longest serving justice on the highest court in the land. Scalia is survived by his wife of 55 years, Maureen, whom he met on a blind date while he attended Harvard Law School. In stark contrast to Scalia's own upbringing as an only child growing up in New York, his devoted marriage produced an abundant family. Who are Justice Antonin Scalia's children? They include nine children and 28 grandchildren.

In a 2008 interview with Leslie Stahl for 60 Minutes, Scalia joked: "Well, we didn't set out to have nine children. We're just old-fashioned Catholics, you know? Playing what used to be known as 'Vatican roulette.'" Scalia and wife Maureen would have five sons and four daughters together. In order of birth, they are: Ann Forest, Eugene, John Francis, Catherine Elisabeth Courtney, Mary Clare, Paul David, Matthew, Christopher James, and Margaret (Meg) Jane. Scalia's nine children have each grown up into accomplished adults representing a variety of fields and professions.

Here's a little bit more information about each of Scalia's nine children and the variety of lives they lead.

Eugene Scalia, the justice's oldest son born in 1963, is an accomplished lawyer and serves as partner at Gibson, Dunn & Crutcher, a Washington D.C.-based global law firm. In 2001, he was appointed by President George W. Bush as solicitor for the Department of Labor. He passionately fought against the passage of the Dodd-Frank bill, even being called "an absolute bulldog" in a 2013 piece in The Nation, "How Wall Street Defanged Dodd-Frank."

John Scalia, an employment lawyer, joined Pillsbury Winthrop Shaw Pittman in their D.C. office as senior counsel in early 2015. With an impressive resume working for a variety of law firms in his career, John was named Top Employment Litigation Attorney by the Washington Business Journal from 2008 to 2011.

Paul Scalia is a Catholic priest serving the Diocese of Arlington in Virginia. Paul's views and opinions on homosexuality did not appear to deviate far from his father's. Paul is also founder of the Arlington chapter of Courage, an organization within the Roman Catholic Church that "seeks to help persons with same-sex attractions develop an interior life of chastity and move beyond the confines of the homosexual identity." In 2013, Paul was a keynote speaker at the Courage Conference.

Matthew Scalia is an Army Lieutenant Colonel and Commander of the 1st Battalion, 46th Infantry Regiment at Fort Benning in Georgia. Matthew was deployed to both Iraq in 2004 for Operation Iraqi Freedom and Afghanistan in 2008 for Operation Enduring Freedom. He also served as Assistant Professor of Military Science at the University of Delaware. Matthew has three children.

Christopher Scalia is an Associate Professor of English at the University of Virginia and father of two. Christopher has worked in PR and is a contributor to The Weekly Standard and Crisis Magazine: A Voice for the Faithful Catholic Laity. His 2015 op-ed for The Wall Street Journal, "Conservatives, Please Stop Trashing the Liberal Arts," made the case for conservative politicians to advocate a liberal arts education rather than to deride it.

Ann Banaszewski is a married mother of six children and currently works as a patient safety companion at a Chicago-area hospital. In 2007, she gained media attention when she was arrested for a drunk-driving charge and three of her children were reportedly in the vehicle with her at the time.

Catherine Courtney is a widowed mother of six. Her husband, Craig Britton Courtney, passed away suddenly at the age of 47 in 2011. Courtney works as staff for the Volgenau School of Engineering George Mason University in Fairfax, Virginia.

Mary Clare Scalia Murray is a married mother of seven children. Murray graduated from Bryn Mawr College in 1990 and taught in both Europe and the United States. She is now an editor for Conversation with Women, a website for Catholic women to "share our stories, and support each other in our journeys of faith."

Margaret "Meg" Scalia Bryce is a married mother of two and leads a marriage ministry, the Cville Marriage Ministry, with her husband at the Saint Thomas Aquinas University Parish in Charlottesville, Virginia.

Condolences to the late justice's children have poured in from Scalia's colleagues and national leaders alike. Scalia's body was flown to his home state of Virginia on Sunday; funeral arrangements have not yet been publicly announced.