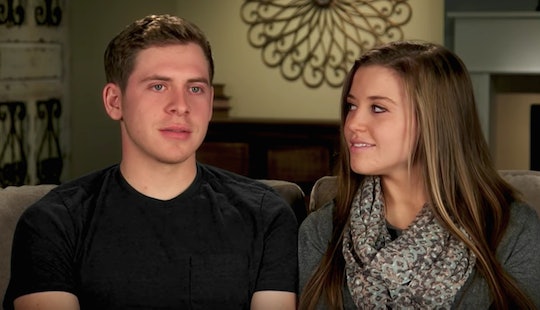 Here's What We Know About Austin Forsyth's Parents

Terry and Roxanne Forsyth have known the Duggar family for a long time, according Us Weekly. The families reportedly first became acquainted at the Forsyth's place of business, the Fort Rock Family Camp and Christian Retreat Center in Combs, Arkansas, according to The Inquisitr. According to the camp's website, the Fort Rock Christian Family Camp is a "camp for family restoration and enrichment" that mimics an "1800s fort and old west town." So, if you like having your laptop or cellphone while on vacation, this isn't the destination for you.

As for Terry and Roxanne's story before they started the camp, that's a little bit more complicated. Although it might surprise some Counting On fans, Terry was married to another woman before he married Forsyth's mom, Roxanne. It turns out Terry was "married to a woman named Julia — with whom he has two kids," and they divorced in 1982, according to In Touch Weekly. There has been some speculation that Forsyth's half-sister, Rachael Forsyth Tunstill, attended his wedding to Duggar.

Following Terry's divorce from his first wife, he founded the Fort Rock camp alongside Roxanne in 1995, two years after Forsyth was born. According to the camp's website, Terry "made a life changing decision" that "God used ... to place a burden on his heart for families." For those of you who might find Terry's phrasing a tad confusing here, he's essentially saying that he felt a calling or desire to help other families in some way. Although Terry hasn't elaborated on this "life changing decision," it could possibly be a reference to a religious awakening of sorts. It's pretty clear that Terry and Roxanne subscribe to the Duggars' strict belief system and that religion plays a big part in their lives.

The public got a taste of Terry and Roxanne's religious beliefs on an episode of World's Strictest Parents, which aired in 2009. The episode's description reads, according to IMDb:

Family and faith are central to everything the Forsyths do. They rarely leave their Arkansas home, which includes a giant family camp where they encourage others to enjoy their daily diet of worship, work, and wholesome recreational activities.

Yup, it sounds like the Duggar family and the Forsyth family have a lot in common, and some people might even argue that the Forsyth family is even more extreme in their beliefs. In May 2016, Fort Rock's Instagram account announced that they'd be hosting Bill Federer to "speak on various aspects of American History." It turns out Federer has some very concerning views on the LGBTQ community and the religion of Islam (Google his name if you're a glutton for punishment). Although the Fort Rock camp's Instagram projects a safe and family-oriented image, one has to wonder what's being said and taught on these retreats. Either way, it appears Terry and Roxanne fit right in with the Duggars.