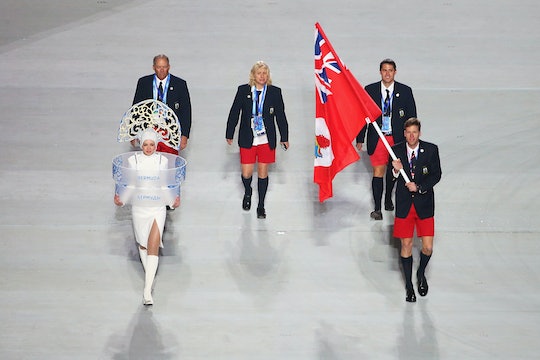 If you know the temperature is reportedly in the single digits in PyeongChang, South Korea and that the opening ceremony is in an open air stadium, then you probably felt a bone-deep chill watching the delegation from Bermuda march out in... Bermuda shorts. But does the delegation actually include anyone who is competing? It begs the question: who are Bermuda's Olympic athletes for the 2018 Winter Games? There is exactly one winter sports Olympian competing for Bermuda this year.

In fact, Bermuda has reliably been putting up one single solitary athlete for every Winter Games since 1992, according to the Bermuda Olympics Association. Men's 15 km freestyle skier Tucker Murphy has been that one athlete for the past three Winter Olympics. The tiny island nation has never medaled at a Winter Olympics, putting up athletes in luge and skeleton events in past years. Murphy is the only the third athlete ever to represent Bermuda at the Winter Olympics and he's the first skier. The 36-year-old finished 88th in his event at the 2010 Winter Games in Vancouver. But Twitter was obviously only concerned with one thing: his legs.

Unsurprisingly, cross country skiers have great ones and Murphy was sporting a pretty decent tan for the dead of winter (thanks, tropics), so he was looking like a snack in those Bermuda shorts during the Parade of Nations. His chances for a medal might be slim, but he inspired his own Twitter moment faster than anyone. (Okay, except for maybe the shirtless guy from Tonga, but a silver medal is still a big deal!)

Murphy competed on Dartmouth's cross-country ski team, representing the ivy league school at the US and Argentine championships. He graduated in 2004 with a BA in Biology modified with Anthropology, before being awarded a Rhodes scholarship to complete his doctorate at Oxford. He's currently studying there, working on his PhD in zoology. (This f*cking guy!) Of course, there are a handful of other countries, mostly warm weather ones, who have similarly tiny delegations. According to Business Insider, Ghana, South Africa, Democratic Republic of Timor-Leste, Madagascar, Malva, San Marino, Singapore, and Ecuador put up only one athlete apiece. Malaysia, the Republic of Moldova, Mongolia, and Bolivia put up two. Nigeria, Lebanon, Liechtenstein, and Montenegro put up three. And Greece, Mexico, Monaco, Serbia, and Bosnia and Herzegovina each competed with four athletes. (But did any of those delegations wear shorts?)

Athletes marching in the Parade of Nations had to battle brutal temperatures inside PyeongChang Olympic Stadium, because in spite of the fact that the $109 million arena was built just for the Winter Olympics, planners neglected to put a roof on it to save time and money. The constructing of Olympic facilities always runs late and over-budget, but this is said to be the coldest Olympics in three decades. The athletes will probably struggle with it, but at least they're in motion. PyeongChang Olympic Stadium hosted a concert last month and six concert goers reportedly suffered hypothermia at the event. The Olympic organizing committee scrambled to head off possible cases of it at the opening ceremony, passing out heat packs and blankets, and trying to speed up the security check-in process, according to Reuters. They also constructed additional windshields around the opening of the stadium.

In the end, the warmest participants in the Parade of Nations were probably the dancers who are hired to form the parade route inside the stadium. They cheered on the athletes as they entered and generally hyped the crowd with nonstop moving and shaking, which looked like an exhausting, but ultimately useful way to prevent frostbite.