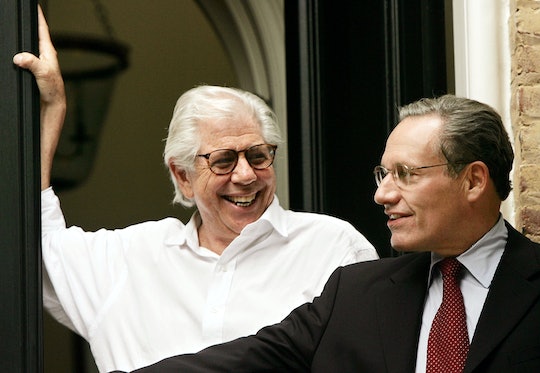 Who are Bob Woodward & Carl Bernstein?

This year's White House Correspondents' Dinner might have been lacking in star power, but it did celebrate journalism and get back to basics. So if you're a history geek, you'll be glad to know that the White House Correspondents' Association paid tribute to Bob Woodward and Carl Bernstein by having shoutouts to them kick off the whole program. They were a good pick — if you don't know who Bob Woodward and Carl Bernstein are, it was a good introduction. Especially given the current political climate.

Woodward and Bernstein are legendary for being the two journalists who reported on the Watergate scandal and took down an administration, in a way that some people can only imagine happening on Scandal. Or out of our very own headlines. It was a very simple story that ended up having huge consequences.

Woodward and Bernstein were assigned to cover a break-in at a Watergate office complex (hence the name) where a Democratic National Committee headquarters was. They ended up connecting the robbery to associates of President Nixon and most of the advisors around him.

The two journalists investigated the Nixon administration and exposed a lot of politicians, staffers, and advisors that were involved in the conspiracy. With the ongoing investigations into some of Trump's ex-staffers and advisors, many people see a correlation between the two administrations. So inviting the two legendary journalists was as symbolic as the president skipping the event altogether.

When they were called up to the stage, Bernstein said that [he and Woodward] always called their work the "best obtainable version of the truth." He said, "it's a simple concept, but the hardest thing to do."

Instead of getting political, he spoke more about journalism and the merits of what journalists do. Bernstein spoke to the importance of the media covering the president, and the White House, and the important role the media plays in American democracy. This year's WHCD went back to its roots as the Nerd Prom.

The new administration has been at odds with the media since before the inauguration, so skipping a dinner that celebrates the press was a big move on the president's part. President Trump tweeted earlier this spring that the American media was the "enemy of the people." What the WHCA was trying to show on Saturday night was that the media can be good — and sometimes also cool. Kind of.

Woodward and Bernstein are legends, for sure, but it's hard to make journalism sexy or interesting for most Americans these days on a Saturday night. As much as they were honored and spoke to the merits of journalism and democracy, it's easy to see how Woodward and Bernstein's message can get muddled. They were preaching to the choir at the WHCD. But that doesn't mean it wasn't good to hear them speak and reminisce about what people are capable of if they get interested enough.