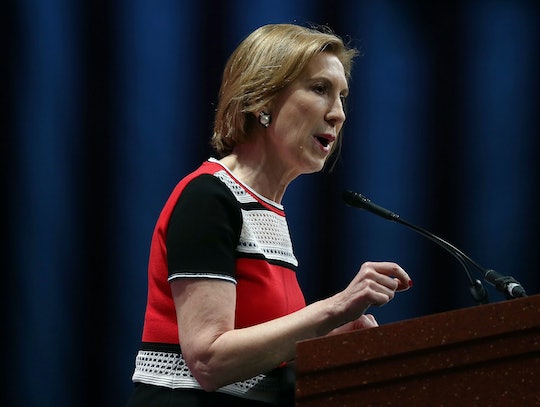 Who Are Carly Fiorina's Children? The Answer Is Complicated

Carly Fiorina made some waves at the second GOP debate in September when she announced that she and her husband “buried a child to drug addiction.” She went on to advocate for criminal justice reform, specifically for drug-related offences. The story touched a lot of people, and also made everyone wonder: who are Carly Fiorina's children?

Fiorina explained in her book, Tough Choices, that while she and her husband, Frank, wanted to have children together, "That wasn't God's plan," according to Heavy. That's why when Frank and Fiorina married, Fiorina took on a motherly role for Frank's two daughters, Lori and Tracy — known as Tribby — who were 10 and 14 years old at the time.

But her role took a heartbreaking turn in 2009, when Lori died of a drug overdose, according to the International Business Times. In her book, Rising to the Challenge, Fiorina described the day she and Frank learned that Lori had died, according to the New York Post:

The two police officers stood awkwardly in our living room. They shifted uncomfortably, as if worried that the mud on their boots might soil the light carpet. They asked us to sit down. Frank collapsed in a chair. I sat on the carpet next to him, my arms wrapped around his knees. The police officers said our daughter was dead, three thousand miles away.

In interviews since her death, Fiorina has said she and Frank had known that Lori was battling addiction, but they didn't know what they could do to help. "Virtually every minute of every day after those two police officers stood in our living room, Frank and I wondered what signs we had missed," Fiorina wrote in her book Rising to the Challenge, according to the IB Times.

An in-depth piece that Politico did on Lori after Fiorina's comment at the Septemeber GOP debate found that she struggled with drugs and alcohol and that she put pressure on herself to be as successful as her stepmom was.

While the girls’ biological mother, Patricia, maintained custody after divorcing Frank, according to the Daily Mail, Fiorina developed a deep connection with them. But it's unclear whether long their relationship stayed strong past their teen years.

For example, the campaign website for Fiorina's failed 2010 senate race reads, "She and her husband Frank live in Los Altos Hills, CA, with their two Yorkshire Terriers, Max and Snickers. They have a daughter and two granddaughters. Another daughter is recently deceased.” In her book, Fiorina doesn't make any reference to Patricia's involvement in Lori's and Tribby's lives. In fact, she doesn't mention Patricia at all and wrote the book as if she was the only "mother" in the girls' lives, according to the Daily Mail.

When asked for comment by the Daily Mail, Patricia said, “There are two sides to every story. That's not how I remember it. Lori was my daughter and I grieve her every day.” This appears to be Patricia’s only comment on the matter.

And Fiorina's relationship with her other stepdaughter, Tribby, is even more mysterious, especially in the last few years. Googling Tracy, or Tribby, doesn't turn up much information. There are only three photos of her; one provided by Fiorina to the New York Post, one from an older, archived version of the Carly For California site, and one lifted from her Facebook page before she set it to private.

According to that archived site, Tribby was co-director of the Moms for Carly coalition, although it appears she’s since left the post. Her bio on the archived version describes her as “a proud, goal-orientated, full-time stay-at-home mother. Tracy learned the importance of hard work and the value of family from her parents, Frank and Carly.” She's also described as a frequent volunteer at her daughters' schools, her church, and the Girl Scouts.

Tribby’s social media channels yield very little information. Her LinkedIn lists her as retired from AT&T, her Facebook page mentions that she likes her local Chick-fil-A, and her Twitter is set to private. Although a 2014 article makes a passing reference to her as spokeswoman for her stepmother, she’s nowhere to be found on the Carly for President site. Only Lori is mentioned; her death is described as a "terrible tragedy."

Given how much of Fiorina's writing and past political writings focus on Lori and Lori's death, it appears that the two had a strong relationship, though it seems Frank's ex-wife would like to differ. Given Tribby's absence from Fiorina's presidential campaign website, it's unclear whether Fiorina and Tribby have a relationship anymore.