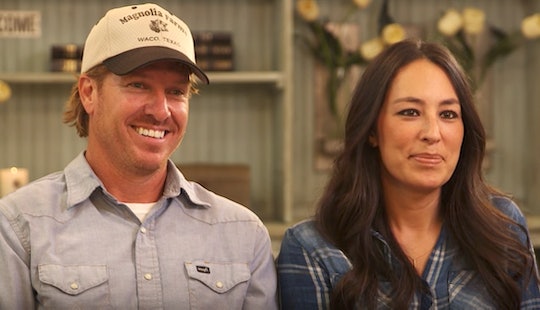 Who Are Chip & Joanna Gaines' Kids?

Fixer Upper's Chip and Joanna Gaines have recently had their hands full filming Season 5 of the home renovation show — and, apparently, having to repeatedly deny rumors of baby number five coming along. The Gaines have had to dispel rumors about Joanna leaving the show multiple times now, shooting down claims that she's either starting a skincare line or pregnant. As it turns out, though, the Gaines are quite happy with their current brood of four. So, for those who aren't caught up, who are Chip and Joanna Gaines' kids?

The Gaines currently have two boys and two girls at home: Emmie, 6, Duke, 8, Ella, 9, and Drake, 11. The children occasionally appear in Fixer Upper, but they're not an intentional part of the show, nor are they subjected to multiple takes while filming, according to People.

"They’re so young and we want to give them the chance to have a normal childhood," Joanna told People in October. She explained that she and Chip don't own a TV at home, so the children aren't dialed into Fixer Upper, either. "So they don’t really understand that we have a show. They don't get it."

Part of the Gaines' attempt to keep their kids out of the spotlight includes keeping their faces out of photo shoots, although Joanna will frequently upload pictures that include her kids on Instagram. (If you haven't taken a peek at the Gaines' social media, let me warn you now: the kids are a super cute bunch who like to play guitar, clamber on top of things, and chase fairies outside.)

As for having a fifth child? Chip and Joanna have definitely considered it. "I'm trying to talk him into another child," Joanna told Parade in a joint interview with Chip in October, according to The Today Show. "But he's not interested."

I look at life as the more the better. If I found out we were having another baby, I would be really excited. We like a full plate. That’s just how Chip and I operate.

For now, however — as Joanna clarified in an April blog post — there is no baby number five on the way. Once the Gaines do have baby news they'd like to share with the world, I'm sure they'll make it clear for fans. Until then, however, fans can just enjoy the glimpses they get of their adorable, already-existing little ones on the show and on social media.