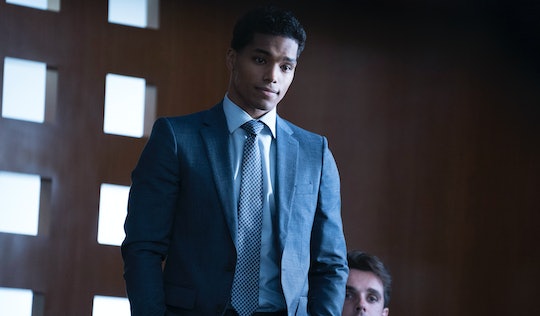 Gabriel's Backstory Is Still A Mystery On 'HTGAWM'

Gabriel Maddox arrived on How to Get Away with Murder as an intriguing stranger with an unknown past. The only thing viewers knew about him was that he was a ridiculously good looking new law student who was smart enough to snag a spot with Annalise even though he was only in his first year. Several weeks later, that's still all anyone knows. But who is Gabriel, really? Why is he so thirsty to be friends with the Keating 4? And who are Gabriel's real parents?

Fans of the show know what to expect from it, so they started constructing theories about Gabriel from the first moment he showed up on screen. His arrival seemed linked to the reveal that Bonnie had had a child as a teenager, especially since Frank was keeping a close eye on Gabriel and referred to him as "her kid." Gabriel was around the right age to be Bonnie's son, making the theory all the more plausible. But Bonnie learned from her sister that her baby had died after all, so it looks like Gabriel is someone else's kid.

Luckily, there are enough theories to cover multiple possibilities, even if this mystery is a particularly tough one to unravel.

Gabriel has kept his background a secret, though there are a few things that fans know for sure. He has a mother who he's still in contact with, though he's never stated her name. He also seems to be willing to do whatever it takes to get close to Annalise's students, first putting the moves on Laurel and then (when that didn't work) on Michaela. Frank and Laurel know exactly who he is, though the show hasn't shared that with its audience just yet. But there are a few potential parents out there.

Reddit user Itsjustme_girl proposed that Gabriel is Sam Keating's son. He could have been the result of an affair, which would make sense because Frank seems to believe telling Annalise about Gabriel will destroy her. There have been several mentions of Sam in Season 5 that could have been dropped in to remind the audience that he existed in time for the reveal that he had a secret son. Annalise would most certainly be devastated by that news considering the struggle she and Sam had to conceive over the years.

Other fans, including Reddit user hawkenh, believe that Gabriel might be Annalise's son, whom she placed for adoption. The timeline doesn't work out quite so well in that theory, especially since Annalise's history with motherhood has been well-trod territory on the show. It's always possible she has more secrets of her own, but if she had been able to carry a child to term and then chose to have him adopted for some reason, the audience likely would have heard about it before now.

Gabriel's desire to connect with the Keating crew hints at some deeper connection with them, unclear as it may be. There's a chance that Gabriel isn't related to any pre-existing character, but I think Sam having another child would work with the kind of storytelling that HTGAWM tends to rely on. It would be a shock, but it would make sense and fit with Sam's pattern of behavior. But who knows? Maybe this mystery runs deeper than anyone expected.