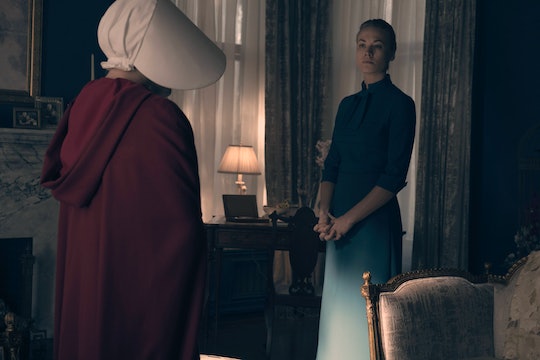 The Bible Passage In 'The Handmaid's Tale' Reveals Gilead's Ideology

In The Handmaid's Tale, the Republic of Gilead is built on extremist Christian doctrine, so phrases and ideas from the Bible are worked into every part of daily life, from greetings to titles to the very framework of Gileadan society. Two figures from the Bible who often come up in The Handmaid's Tale are Jacob and Rachel. The Christian fundamentalist group that took over the United States and turned it into Gilead called themselves the Sons of Jacob; the center where Offred was trained to be a handmaid was called the Rachel and Leah Center. But who are Jacob and Rachel in The Handmaid's Tale?

The first episode of the series quoted a passage from the Bible that showed how and why Jacob and Rachel were so central to the ideology of Gilead. Before "The Ceremony" — the monthly ritual where Offred's Commander attempts to impregnate her (something that she has absolutely no say in) — a passage from Genesis (30:1-3) is read out loud each time, which makes it clear exactly where the idea originated from to have handmaids act as surrogate mothers for barren wives. The same passage is the epigraph of the novel the show is based on.

And when Rachel saw that she bare Jacob no children, Rachel envied her sister, and said unto Jacob, 'Give me children or else I die.' And she said, 'Behold my maid, Bilhah. Go unto her and she shall bear upon my knees so that I might also have children by her.' And she gave him Bilhah, their Handmaid, to wife, and Jacob went unto her.

In the Old Testament, Jacob went to stay with his mother's brother Laban, and while he was there he fell in love with his cousin Rachel. Laban agreed to let Jacob marry Rachel, but only after Jacob had worked for him for seven years. Jacob did so gladly, but on the day of the wedding Laban tricked him. Instead of marrying him to Rachel, Laban had Rachel's older sister Leah step up to the altar, disguised under a veil; his excuse was that he couldn't marry off his younger daughter before his older one. When Jacob discovered the deception, he was horrified, but unfortunately already married to Leah (he didn't notice the switch until the following morning, somehow). Laban told Jacob that after another seven years of labor, he could marry Rachel as well. Jacob agreed so he could be with the woman he really loved.

Even more trouble arose following the marriages, as though forced bigamy wasn't bad enough. Leah bore Jacob many children, but Rachel was infertile. As detailed in the above passage, Rachel decided to give Jacob her handmaid Bilhah so that he could conceive children with her and Rachel could raise them as though they were her own. Bilhah didn't get much of a say in the matter. She bore Jacob two sons, but this lead to jealousy between Leah and Rachel. Leah gave her handmaid Zilpah to Jacob, too, to produce more children than her sister had. Again: no one sought out Zilpah's opinion. All in all, Jacob had 13 children with the women.

To solve the country's infertility problem, the Sons of Jacob turned to this story for a solution. It became the foundation for the new society they created, despite the fact that it was a foundation full of cracks.