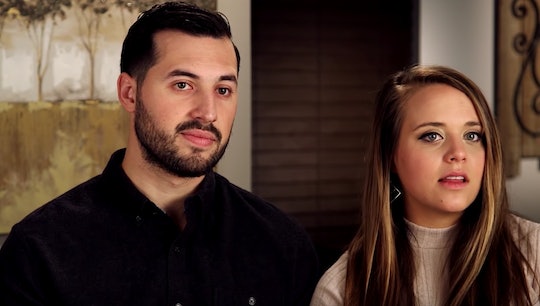 'Counting On's Jinger Duggar Is Spending Some Quality Time With Her In-Laws In L.A.

People are very familiar with Jinger Duggar's parents, Jim Bob and Michelle Duggar, who raised the 19 kids that are the stars of TLC reality show, Counting On. But when it comes to Jinger's husband, Jeremy Vuolo, people are less familiar with his parents. Based on Jinger's recent Instagram posts, it's easy to see why some people might be wondering — who are Jeremy Vuolo's parents?

Jinger is pretty close with her in-laws, and this was confirmed when they came to visit her, Vuolo, and their adorable 1-year-old daughter, Felicity, this week. Jinger documented this trip on Instagram, where she shared that she had been hanging out with Vuolo's parents (and her daughter). In one of the photos, Jinger can be seen holding Felicity with some help from Jeremy's mom, Diana Vuolo. In the caption of the Instagram post, Jinger revealed that Jeremy's parents were visiting their granddaughter for the week (so sweet) and were looking forward to exploring new spots in Jinger and Jeremy's current hometown of Los Angeles, California. In another post, Jinger shared that her and Felicity went to the Los Angeles zoo with Jeremy's parents, too.

Their little outings seem like so much fun, and were definitely made better thanks to Felicity's grandparents being there. But after looking at these posts, it's understandable for people to be curious about Jeremy's parents and what they do for a living.

Jeremy's mom and dad, Diana and Charles Vuolo, are the parents to three kids — Valerie, Charles, and Jeremy. His parents raised their family in Pennsylvania in a "Christian home", according to a blog post on Jinger and Jeremy's website. In that same post, Jeremy describes his parents as "faithful", which is such a special thing to say about them.

Jeremy's parents have many talents. Jeremy's father, Charles, is a pastor (just like his son) and Diana is a professional violinist, according to the Duggar Family Blog. Diana is also the founder of the nonprofit organization, SWAN 4 Kids — an incredible charity that provides music lessons to children whose parents have a history of incarceration. Diana has performed the violin in orchestras across the nation and her charity was even featured on a September 2018 episode of Counting On, according to Inquisitr. How cool is that?!

Jeremy has only said the sweetest things about his mom. In an Instagram post penned last year, Jeremy brought his mom's many accomplishments to light and praised her for her commitment to religion and helping others who are less fortunate. "My mother has demonstrated what it means to live life of Christlike sacrificial love towards others," he wrote. "A woman desperately dependent on God in prayer, gripped by the reality of suffering around her, and courageously determined to be the change she desires to see, Diana Vuolo is my role model. And by God's grace, she will be for my daughter, as well."

Jeremy's parents have a lot to teach their granddaughter about music, faith, and charity. And it seems like they're already getting a head start on this while on their trip to Los Angeles.