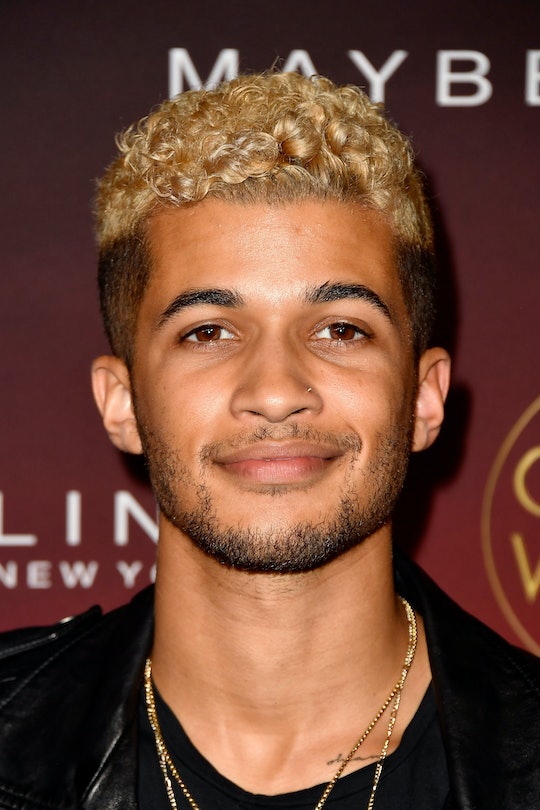 It's "Most Memorable Year" night on Dancing with the Stars, which should really be sponsored by Kleenex because it is nothing but tears the whole way through, for example with Jordan Fisher's story about his parents. So who are Jordan Fisher's parents? Dancing with the Stars reveals his heartwarming backstory. If the first part of the show didn't make you cry already (I was done for by the first dance), then this will certainly do it. Fisher himself didn't even get through the dance without tearing up.

Fisher and his partner Lindsay Arnold performed an absolutely gorgeous contemporary routine to "Take Me Home" by Us The Duo, who were present to perform the song live. In the introductory video package, Fisher explained why 2005 was his most memorable year. It was the year he was officially adopted by his parents. His biological mother had him when she was 16 years old and struggled with substance abuse issues. But luckily, Fisher's grandparents took him in when he was a baby. "They were always mom and dad to me," he said. The adoption wasn't official, however, until 2005. "I think that there's something to be said for a document legally proving something that you know to be fact already," Fisher said, adding, "It's kinda like being reborn."

I think the line in the video that really killed me was when Fisher said, "My being adopted — it saved me. It literally saved my life. It could have been really tough for me and it wasn't. I was so loved." If you thought this was emotional on your end, it was nothing compared to the effect it had on the performer himself. He began tearing up as soon as he saw the video, and you could see it in his face as he performed. As soon as it was over he went to where his parents watched in the audience to give them both a huge hug and now we are all crying together. Judge Carrie Ann Inaba literally choked back tears as she gave him feedback.

Luckily, all of that emotion reflected positively in his performance, which was, if I do say so myself, absolute perfection. "That was exquisitely flawless," raved Bruno Tonioli. "You dance with such open hearted sincerity and honesty," he said, continuing, "It was the real you out there magnified a thousand times." Through her tears, Inaba also praised the dance as "exquisite." She said, "That's what we all dance for — to have that feeling that you have."

The heartfelt performance earned Fisher the highest score of the night, and the highest score of the season, with the first perfect score from a judge. Both Inaba and Tonioli rewarded him with scores of perfect 10, while Len Goodman, forever the grumpy grandpa you can't help but love, awarded him a rare 9. But the fact remains that a 29 out of 30 is setting the bar pretty darn high, especially this early in the game. The other dancers had better watch out.

Fisher first rose to national recognition when he stole the show in Fox's Grease: Live! as Doody (yes, Doody), with his fantastic performance of the song "Those Magic Changes." Fisher then went on to star in Broadway's most popular show, Hamilton, as John Laurens and Philip Hamilton. It's not often that Dancing with the Stars features a performer at the very beginning of their career, but to me it looks like Fisher is just at the beginning of a serious upward trajectory that can't be stopped. With a burgeoning music career, youth, and some serious new dancing skills, I can't wait to see what comes next for him. And, I'd imagine, neither can his incredibly supportive mom and dad.