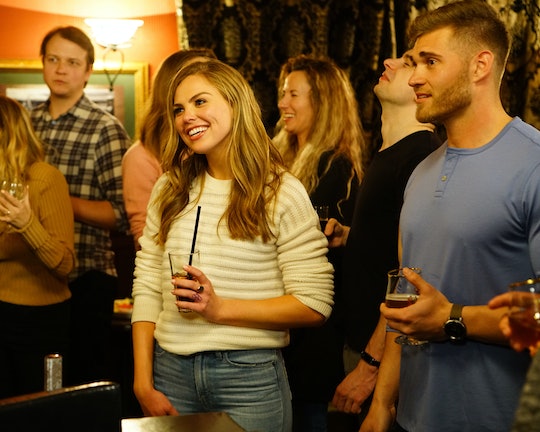 By now, everyone and their mom knows about Luke P. on The Bachelorette. As Hannah's resident troublemaker, Luke isn't winning any Bachelor Nation popularity contests, and he doesn't seem to care. It makes for good TV, but how do Luke's parents feel about the way he's being portrayed? Actually, who are Luke's P.'s parents and are they Team Luke or do they think their son needs an etiquette class? Here's what I know.

There isn't a lot of information out there on the ABC villain's personal life, other than the basics. His mom, Elizabeth Nicole, can be found sprinkled throughout Luke's Instagram page, where he showers her with praise and promises of bear hugs. Her Instagram page bio says she's a US-based producer, so it looks like showbiz runs in the fam. On her website, she explains she offers "full service production," and can come to you, or you can go to her in Boulder, Colorado. The lady stays busy, offering everything from catering and craft services for a production shoot to scouting, casting, edits, and everything else involved in a project.

As far as Luke's dad, all I could find was that he's a business man of some sort. If you want details on his brother or sister-in-law, I've got that handled. I also have all the Twitter tea, because fans have major opinions on Luke's continued presence in the house. But detailed info on good, old dad? Nope. According to Gainesville Times, he runs Parker Warehouse, "an import and export company that has been around for 45 years." Even with that small tidbit, Luke doesn't say much about his parents in general that I can see — especially not his dad.

Now that Hannah's getting down to the hometown visits, Tyler C., Peter, Jed, and Luke P. are the guys to watch. And yes, I put them in order according to who I want to see win down to who should've gone home a few episodes back. Sorry, not sorry, but even with the magic of TV edits, I'm exhausted by Luke P. and the toxic masculinity he exhibits. I understand that Hannah may be attracted to other parts of him, but in ignoring the major red flags, she's setting herself up for what next week's promo trailer reveals. I won't be the spoiler police, but it suggests Luke P. crosses a serious line in regards to questions about premarital sex. Hannah's reaction is all of us, honestly, so I doubt the show will feature much more of Luke past the next episode.

That said, I feel for the other contestants that have had their time drained by all the focus on Luke P.'s antics. He could be the nicest guy in the world off camera, as his family says. According to the same Gainesville Times piece, his brother, Mike, said, "When I saw him on there — I can read my brother better than anybody — and I saw him being real, I saw him being Luke when he smiled, I saw the Luke everybody loves," Mike said. "And when I saw that … I was able to take a deep breath."

I may not have all the information you're looking for about Luke P.'s parents, how they feel about Hannah, or how their son behaves on national TV, but with the hometown visit on its way, patience is a virtue. That is, unless his unraveling happens before you get the chance to hear more about Mom and Dad. My bet is on the second one.