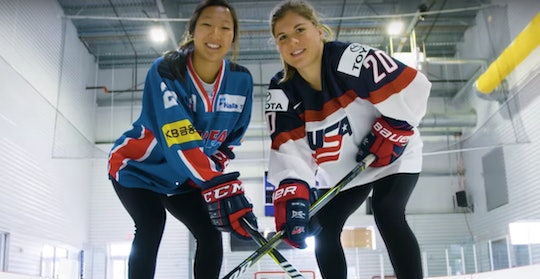 Every two years, the Winter and Summer Olympics allow you to hear the stories of talented athletes from the United States and beyond. This is one of the best parts of the Olympics — knowing just what it took for people to get to where they are. And when you tune in to watch women's ice hockey during the 2018 Winter Olympics this week, you will definitely want to know who Marissa and Hannah Brandt are — because their story is one that you won't be able to shake from your head.

When women's ice hockey airs this Wednesday evening, according to CBS News, you'll want to keep an eye out for the last name Brandt — not only for Team USA but also on Team Korea. This is because siblings Marissa and Hannah Brandt are not only playing the same sport in this year's Olympics, they're playing against each other on opposing teams. Marissa will be playing for the unified Korea team and Hannah will be playing for Team USA.

In 1993 Greg and Robin Brandt adopted Marissa from South Korea while pregnant with Hannah, and welcomed Hannah into the world six months later, according to ABC News. Together throughout their lives, the siblings practiced and played ice hockey, with their hard work leading them to the this year's Winter Olympics in PyeongChang, South Korea. How cool is that?

If you're wondering how Marissa can play for Team Korea while still being raised in the United States, the answer is simple. Athletes who reside in the United States, but were born elsewhere, according to The Atlantic, have the option of competing for another country. The only requirement is that athletes must be a "national of the country for which he or she is competing." So, being born in Korea or having a direct descendant from a country abroad allows athletes to compete for other countries that are not the United States.

Just like people don't expect baseball players from the New York Yankees to be born in raised in New York, as The Atlantic explained, people can't expect every person who was born elsewhere but raised in the United States to play for the United States. And although this might seem rare, according to OlympStats, there have been plenty of siblings throughout the history of the Winter and Summer Olympics that have gone on to play for opposing teams in the same event.

But Marissa and Hannah's story is a little bit more special this year, especially with Marissa playing for the Korean women's ice hockey team. Marissa told CBS News that having the opportunity to play for the first unified Korean team to compete in the Olympics was an opportunity that she could not turn down. Marissa said, according to CBS News:

If it is an honor for both Hannah and Marissa to compete for their home countries, then you can only imagine how much pride their parents feel. Greg Brandt told CBS News:

You know, one for the United States, I mean, that's, you know, you just — so prideful in that. And then Marissa representing the home country of Korea and her birth country? Just unbelievable.

Siblings can oftentimes be a blessing and a curse — they can sometimes be the only people who really understand you, but on the other hand, they know you a bit too well. When siblings are constantly compared to one another throughout their lives, the sibling rivalry can become intense. And the Brandt sisters are definitely giving "sibling rivalry" a whole new meaning at the Winter Olympics. But this isn't the first time the Brandt sisters are playing for opposing teams. Both Hannah and Marissa played for different college teams, too, according to CNN. Marissa played for Gustavus Adolphus College in St. Peter, Minnesota, and Hannah played for the University of Minnesota.

Although they are competing against each other at the Olympics, both sisters are incredibly excited to do so. "It's kind of like fate for it to have worked out the way it has," Hannah told CBS News. "I don't think either of us could have ever dreamed it." But their dreams have now become a reality at the Winter Olympics.