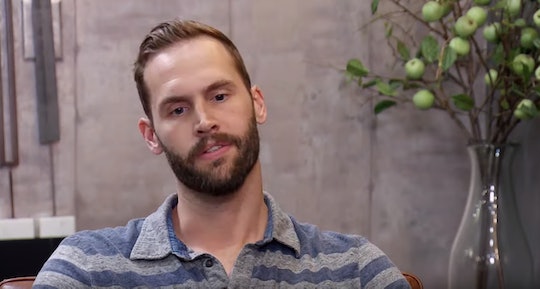 Matt Gwynne and Amber Bowles seemed like one of the most promising couples on this season of Married at First Sight, but things aren't going so well. Matt's been emotionally distant from Amber, and his shady behavior has people curious about his off-camera private life. He briefly mentioned having issues with his mom and dad, but because they haven't been seen on the show, viewers are wondering who Matt’s parents are on Married at First Sight and why they've been estranged from their son.

Matt’s social media pages are set to private, so it’s hard to track down any of his family. For now, the only thing viewers have to go on is what Matt’s said about them on the show. After the wedding, Amber — whose entire family was present at the ceremony — asked Matt why none of his family showed up.

“My parents were recently divorced, within the last two years,” Matt tells Amber in Episode 3. “You know, a lot of stuff went down, and it’s just been a really difficult situation at home.” He tells her he and his father hadn't spoken to each other in years, and how it would have felt strange call him and ask him to show up at this unconventional wedding. Matt says that he thought about asking his mom to come to the wedding, but decided against it because he didn’t want to bring his family drama into this new relationship with Amber.

When it’s time for the couple to meet each other’s families, Matt’s parents are nowhere to be seen. Instead, Matt’s friends how up to meet Amber, and they don’t reveal any details about his mom, dad, or their family issues. However, Amber’s family — who she is really close with — are there, and they grill Matt about why his parents weren’t at the wedding.

“It just didn’t feel right,” Matt tells them. “You know, I wanted people there who were in a good place, that are positive and supportive, and I wanted everybody to get along. I didn’t want any drama. I was worried that if they all came there would just be some problems, and I didn’t want that.”

Amber’s parents don’t look convinced, but Matt tells them that he’s open to reconnect with his parents in the future. “I’ve always been really close with my family, and that’s why the recent event and everything that’s happened, it’s really difficult,” he explains. “I was kind of the same way. I talked to my mom every other day, talked to my dad every week. That’s why it’s really been tough, and that’s why I truly believe that when the time is right, we will reconnect and figure things out. It’s just a shame that the timing of this thing’s taking place right now, because I would love for them to be here.”

Since then, Matt has been pulling away from Amber, and he’s been leaving her alone for days on end. It’s safe to say their marriage is on shaky ground, and considering Matt’s parents were absent from his wedding, I doubt they’ll be present for a divorce. I guess viewers will just have to wait and watch through the end of the season to see if they make a cameo.