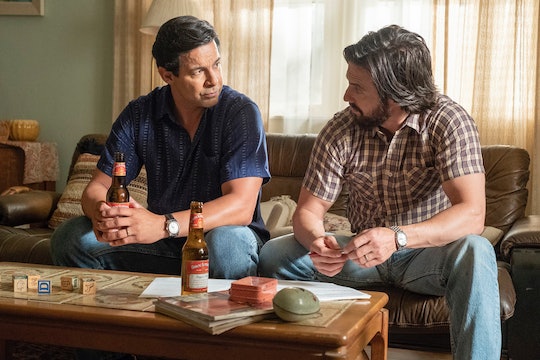 Miguel's Kids Definitely Exist On 'This Is Us'

Though Miguel is a regular fixture on This Is Us as both Jack's best friend and Rebecca's future husband, his extended family doesn't get quite as much airtime. Miguel has an ex-wife named Shelly who used to be part of the Pearson-Rivas double date crew, as well as kids of his own. But who are Miguel's kids on This Is Us? The audience hasn't really gotten to know them, at least not yet.

The Pearsons are a tight-knit team, but Miguel's side of the family has always been absent from any holidays or get-togethers. It's possible there are explanations for that: they're with their mother's family, or their relationship with Miguel simply isn't relevant enough to the main storyline to merit much attention. But it's hard to not be curious about them. Miguel has spoken about feeling like an outsider in the Pearson family (it doesn't seem like anyone was all that thrilled about him marrying Rebecca), so perhaps his kids don't feel welcome joining in during family time.

The existence of Miguel's kids is so vague on the show that I could not tell you how many he has or what their names are. It doesn't seem as if it was ever stated. But they might come up in Season 3, finally answering all the questions viewers have about them.

Actor Jon Huertas was able to reveal a few details about Miguel's children to The Hollywood Reporter, noting that they were "about five years older than Jack and Rebecca’s kids." He didn't have all the answers, so he couldn't comment on whether or not the Rivas kids were pals with the Pearson triplets. It seems Miguel's kids are out there somewhere, and that's as far as it goes for now. Huertas was certain of one thing: though those kids hadn't been cast at the time of the 2017 interview, they were "absolutely good-looking" in his mind.

While speaking with Country Living, Huertas mentioned the producers' plan to delve into the lives of ancillary characters like Miguel. They've already done that in the third season with Toby, who got his own dedicated episode full of flashbacks; they also focused more on Beth's day-to-day outside of her marriage to Randall. The same will be true of Miguel, though he hasn't gotten his day in the sun quite yet.

They're going to do that with all of our characters and start to peel back the layers of the characters that love Kate, Kevin, and Randall. There's a possibility of finally seeing Miguel's kids and how they fit into his life, so I think if we're going to see the kids, we would have to find out what happens [with his ex Shelly].

By delving into Jack's past this year, the show will also reveal the origins of his friendship with Miguel. And Huertas told Country Living that Season 3 might clarify how Miguel and Rebecca's relationship shifted from the platonic to the romantic. Both storylines could open the door for more information about Miguel to emerge, and that includes revealing who his children are. Did they approve of their dad's second marriage? Do they get along with the Big Three?

Fans are notoriously iffy on Miguel himself, but he's a part of the Pearsons' lives, which means his kids should enter into the picture eventually.