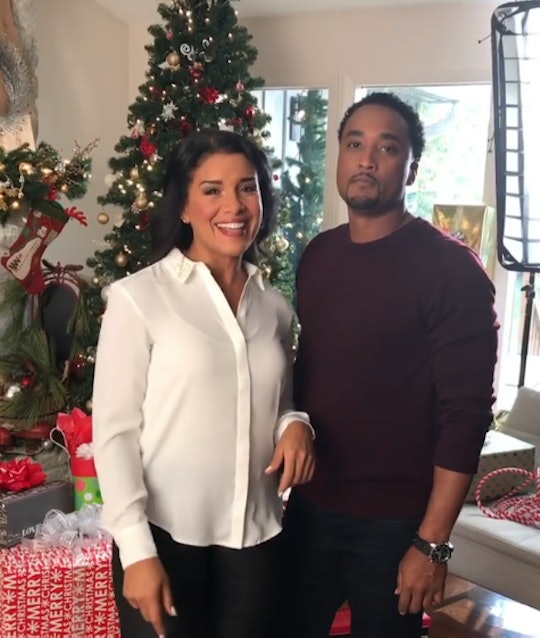 Meet The Stars Of 'Flip Or Flop Nashville'

The much-loved HGTV series Flip or Flop is introducing a new iteration of the franchise set in Nashville, with two new hosts to take the audience through the renovation process. But before getting to meet the house flipping team during the show's Jan. 18 premiere, fans might be wondering: who are Page Turner and DeRon Jenkins on Flip or Flop Nashville? Their story is actually pretty interesting.

Page and DeRon are exes with a decade of partnership behind them, according to the HGTV site. They've flipped houses in Nashville and Atlanta, but real estate wasn't always where DeRon made his money. He used to be a professional football player, but renovation was one of his interests long before he decided to make a career out of it. At first, however, it was mostly about personal projects.

"I really had no idea what I was doing," DeRon told HGTV. "I just came up with some ideas of how to finish out the basement and add a bathroom, and I added a room for a pool table. Before I knew it, I renovated this home. And so that was always in my back pocket."

DeRon retired in 2004 after seven years in the NFL, which was when he became a licensed renovator and started his own company. He decided to focus his efforts in Nashville, a city he loved. "My mission ever since has been to transform this city one house at a time," he said in the same HGTV interview.

Page is a realtor, the principal owner and broker of EGAP Real Estate Inc., according to website Stay on the Go. Considering their complimentary fields, it seems natural that Page and DeRon would end up working together. They met on the job, when Page was showing a client a house that DeRon happened to be working on. She became his real estate agent first, then his girlfriend. Page told News Channel 5 that they dated for around five years, but their working relationship outlasted their romantic one. "We work well together now, we just didn't work well together in that aspect," Page said in an appearance on Talk of the Town.

She first discovered the opportunity with HGTV when she received an email asking if she knew of any married couples in Nashville where one partner was a realtor and the other a contractor. Page couldn't think of anyone, but it later occurred to her that she and DeRon could be a good fit despite their breakup — and perhaps even because of it. Their story definitely makes them stand out, and HGTV must have agreed because they decided to move forward with the project.

The spinoff was previously called Joined at the Flip before being renamed Flip or Flop Nashville. And while Page and DeRon's past might cause them to "butt heads" on occasion, DeRon promised Stay on the Go that there was no real drama. "Yeah, you've got to have some entertainment in between, but the reality is the audience wants to see a good real estate agent find a property, a great contractor to complete the renovations, make it beautiful, make it special, and the house sells," he said. "That's the basis of the show. Everybody wants to see a good before, during, and after shot on the houses."

The fact that Page and DeRon know each other so well (and already have plenty of experience working together) makes their Flip or Flop future seem promising. A little banter between friendly exes could add something extra to the proceedings, but at the end of the day DeRon was right: it's all about how those houses turn out. Fans can see for themselves when the show premieres.