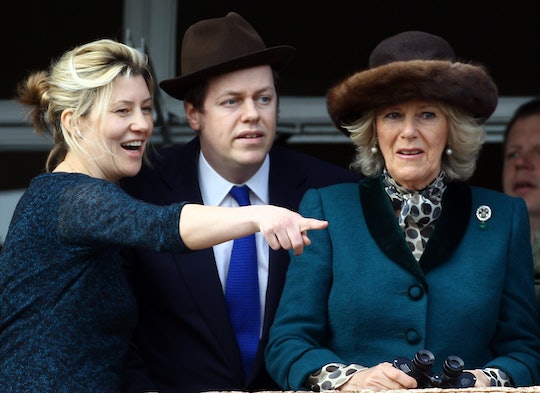 Did You Know Prince Harry & Prince William Have A Stepbrother & Stepsister?

Prince Harry and his big bro Prince William are some of the best-known siblings on the planet. But, perhaps surprisingly to, they’re not the only siblings in their family. Remember that their father Prince Charles married Camilla Parker Bowles in 2005, after they’d both been previously married, so she had children just like he did. So, who are Prince Harry’s step-siblings? And why don’t we ever hear about them?

Laura Lopes and Tom Parker Bowles are the children from Parker Bowles' first marriage, according to Town & Country, and the princes are fairly close to them. In fact, both Prince Harry and Prince William, along with Kate Middleton, attended Lopes' wedding in 2006, according to Marie Claire, which reported that she married a former model-turned-accountant named Harry Lopes, and the couple now share three children.

That family relationship was on display again when Prince William and Middleton got married, as Fox News reported, as Lopes and Tom Parker Bowles were in attendance at their wedding. In fact, Lopes' daughter Eliza was part of Middleton’s wedding party, according to HuffPost. Lopes also attended the 2018 wedding of Prince Harry and Meghan Markle, according to the Daily Mail.

They’re both somewhat involved in creative professions. Lopes co-founded an art gallery in London and also served as a correspondent for Tatler magazine, according to Fox News.

Parker Bowles is a food critic who maintains a higher profile. He’s a food critic who’s appeared on MasterChef, as InStyle reported. He’s also written seven books on cooking and served as a food editor for Esquire.

When Prince Charles left for naval duties overseas their romance dwindled and Camilla married Andrew Parker Bowles, according to Hello! Magazine. Of course, Prince Charles met and married Diana, and that relationship is famous history.

They rekindled their affection while Prince Charles was still married to Diana, according to the Daily Mail, in a scandal that rocked the world. After Diana’s death, they kept their romance under the radar and held off on marrying until 2005, according to Biography. By that time all their children were adults, and Prince Harry said in an interview with the BBC that the family is happy for Camilla’s role in his father’s life: “We are very grateful for her. She’s made our father very happy."

It appears to be all-in-the-happy-family now. Which is good news for a family who bore such public tragedy and recovery. Don’t look for Tom and Laura in the public eye though, that honor is reserved for their royally famous stepbrothers.