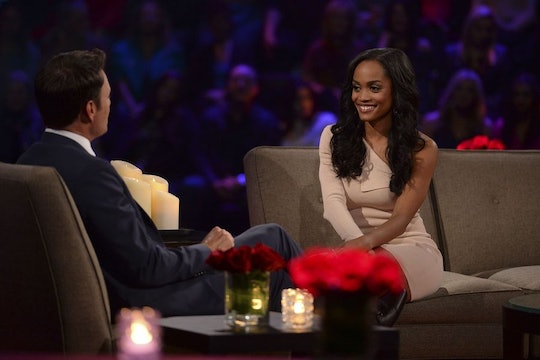 Both franchise creator Mike Fleiss and host Chris Harrison excessively teased the "historic" event at Nick Viall's After The Final Rose special following his season finale of The Bachelor. We now know that the big announcement was parading out a few of Rachel Lindsay's upcoming The Bachelorette boys in anticipation of her upcoming season this May. So who are Rachel's Bachelorette contestants?

Production literally wheeled out a faux-mansion backdrop and several potted plants onto the After the Final Rose stage to introduce Rachel to four of her guys. And lest she be deprived of the limo experience, they saved the rest of her contestants for the actual season premiere, which was a blessing, because the stunt turned out to be super awkward. Limo introductions are often cringeworthy to begin with, given contestants' affinity for corny puns, gag gifts, and "memorable" outfits. But doing it all in front of a studio audience really amped up the ham factor, and Rachel seemed super uneasy. She literally told one contestant named Blake, "I need you to make me feel more comfortable."

And he was only the second worst of the four. The honor of worst introduction definitely goes to a guy named Dean, who announced, "I just want to let you know, I'm ready to go black and I'm never going to go back."

Rachel very, very generously laughed while the audience cheered, but wow, it was really gross.

The other two guys seemed fine, although one laid it on a little thick, presenting Rachel with plane tickets to Vegas and an engagement ring. But Twitter pretty universally did not like the cheap attempt at kicking off Rachel's season early. She wasn't done up in customary cocktail party attire (although she looked amazingly powerful in a black pantsuit with a plunging neckline and a blazer draped over her shoulders), and many fans seemed to think the show was taking away from her own season premiere moment. Thankfully, they quit while they were behind and stopped bringing out guys after the fourth one.

Rachel is making history as the first black Bachelorette or Bachelor to be chosen for the honor. She also made it farther than any black contestant ever has in the franchise's history during her season with Nick, giving the show plenty of opportunity to explore racial dynamics frankly and openly during her relationship with Nick. Given the audience's positive reaction to that and to Rachel, she was the perfect choice for the groundbreaking role. Hopefully, she's greeted with some more promising options than the four we were introduced to at After the Final Rose. Because she already deserves better.