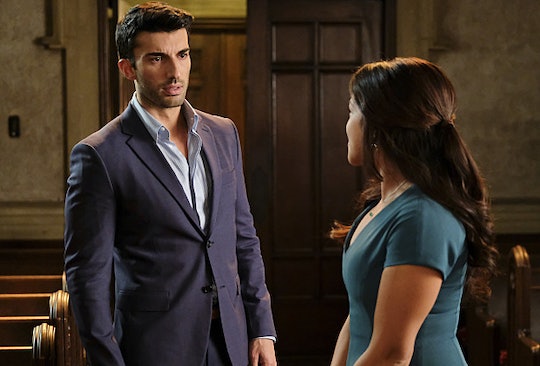 Who Are Rafael's Real Parents On 'Jane The Virgin'? He's Not A Solano

Jane the Virgin thrives on suspense and boy was Monday night's episode filled with it. After the narrator indicated a mysterious envelope would reveal life changing information by the end of the hour, it was obvious to some what the narrator meant. Inside the envelope was Rafael's birth certificate and it turns out he's not a Solano after all. That's right, my friends. It turns out that Rafael was adopted on Jane The Virgin, meaning the people he thought were his own flesh and blood are actually his adoptive parents. So that begs the question: who are Rafael's real parents on Jane the Virgin?

Rafael's family has always had it's issues. It was Rafael's sister, Luisa, that accidentally inseminated Jane with his sperm and she only did that because she was so emotional over the fact that she was having an affair with her step-mother, Rose, who turned out to be the crime lord, Sin Rostro. (Whew!) Then it turned out there was actually another crime lord in the family, Rafael's mother, Elena/Mutter. On top of that, Rafael's long lost brother was also a criminal. Still, despite all these issues, Rafael has never turned his back on his family and was also determined to preserve the Solano name, which made it even more devastating to discover he's not a Solano after all.

According to the birth certificate, Rafael discovered he was actually born in Italy and that's where Elena adopted him shortly after she lost her own baby. This seems to indicate that Rafael's father didn't even know Rafael wasn't his son and that's why Elena was paying off the nun to keep it quiet. Now that Rafael knows the truth, though, he'll probably want to keep this information quiet to himself as well. Since he's not really a Solano, he may not have any legal right to the Marbella and everything else his father owned. Anyone could use this information against Rafael if it were to ever get out and that's the last thing he needs right now.

Although fans definitely want to know who Rafael's real parents are (hopefully a lot less crime lord-y), Rafael may not even want to know the truth right now. It seems almost every time Rafael has tried to find a long lost relative, it always backfires on him. Does Rafael really need to find another crazy relative? Probably not. However, knowing Jane, she's going to try to find out everything she can about Rafael's true lineage whether he wants her to or not. Maybe they'll finally turn out to be the kind of nice family Rafael deserves.