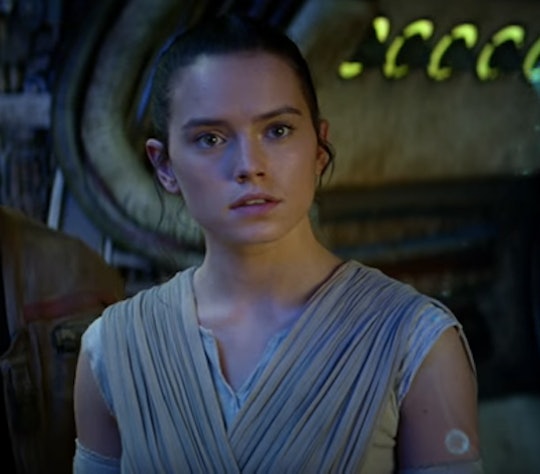 Who Are Rey's Parents In 'Star Wars: The Force Awakens'? One Theory Is Pretty Interesting

In addition to smashing previous box-office records and living up to its hype, Star Wars: The Force Awakens has left viewers with a lot of questions. Arguably the most prominent (read: important) question that needs answering ASAP? "Who are Rey's parents?" Seriously J.J. Abrams, can you throw us a helpful hint? Anyone? Bueller?

Thankfully, the internet is here to dish out a few potential and highly possible theories. (SPOILER ALERT: This post discusses plot points in Star Wars: The Force Awakens. Proceed at your own risk.) While Rey's exact origins are unknown (the character isn't even given a last name to work with), there are plenty of theories to fill in the gaps that were (probably intentionally) left by the writers. At first, may assumed and speculated that Rey was Luke Skywalker's daughter, but that was before the movie hit theaters. Now that the film is out and Rey's impressive Jedi abilities are on display, more than a few Star Wars fanatics are starting to assume that Rey is Obi Wan Kenobi's daughter. (This makes her Star Wars royalty, you guys.)

There are multiple details that make this recent theory more than probable. UPROXX highlights them in a theory video, citing the similarities in their outfits, Rey's uncanny specialization with the Jedi Mind Trick, an ability the late Obi Wan excelled at and could have been passed down to Rey. There are also multiple scenes in Star Wars: The Force Awakens that shows Rey in similar situations to past Kenobi experiences like, for instance, Rey hiding out in the Starkiller Base, a possible juxtaposition to Kenobi hiding when he was de-activating the tractor beam in Star Wars: A New Hope.

In order for this theory to pan out, Kenobi would have had an extra-marital affair, although it is unclear with who or when.

While this seems like a pretty promising theory, it's only the latest one to emerge about Rey's parentage. Here are a few other popular ideas about Rey's origins:

Others suggest that Rey could be a Skywalker, the daughter of Han Solo and Leia. In The Force Awakens, Maz Kanata asks Solo, "So, who's the girl?" and Han and Leia share some precarious glances aimed in Rey's direction, which do nothing but add fuel to the already popular theory.

Many are pointing to Rey's connection to Luke's lightsaber as a potential sign that she is his daughter. The lightsaber called to Luke at the beginning of his journey as a Jedi, and seemed to call out to Rey in a similar fashion, being pulled from the snow when she needed it the most.

Rey Is The Force Itself

And then, of course, there is the theory that Rey is a manifestation of the Force itself. Anakin Skywalker AKA Darth Vader is believed to have been conceived via immaculate conception, a theory assumed from Star Wars: The Phantom Menace. Anakin's mother, Shmi Walker, says, "There was no father. I carried him, I gave birth, I raised him. I can't explain what happened." If this theory is correct, the likelihood that Rey was immaculately conceived as well is all the more probable. Furthermore, Rey has had no formal training or mastery with the Force but clearly possesses some natural ability, which could mean that the Force is an intricate part of her beginning and/or birth.

In the end, we may never know exactly who Rey's parents are (if she has any at all). And that's the beauty of the Star Wars Franchise: it keeps you coming back for more if only to keep you guessing.

More Like This
The Summer I Turned Pretty Is A Beautiful Coming-Of-Age Story For Teens & Parents
Elmo Talks About Getting His Covid Vaccine In A Cute New Video
Meghan Markle Calls On Men "To Be Vocal" In The Aftermath Of Roe v. Wade Ending
Yellowstone Season 5 Officially Has A Premiere Date