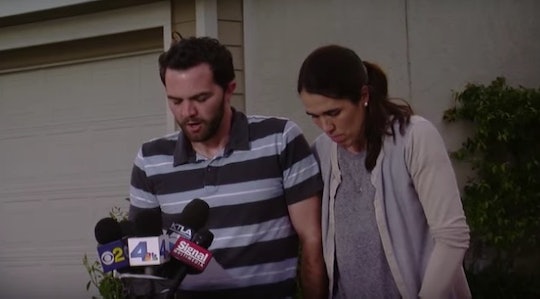 Who Are Rusty & Summer Page? The "Save Lexi" Parents Keep To Themselves

On Tuesday, Rusty and Summer Page filed an appeal to the State Supreme Court that contested a decision to remove a 6-year-old foster child named Lexi from their care. Lexi is 1/64th Native American, and according the federal Indian Child Welfare Act, she is not to be separated from her biological family. Since the decision, she's been sent to live with relatives in Utah, but her foster parents have not given up their fight. But who are Rusty and Summer Page?

Rusty and Summer Page live in Santa Clarita, California. They have three children (not counting Lexi). According to NBC News, Lexi lived with them for four years. The Pages have both been very vocal about this case, speaking openly with the media and entreating supporters to sign petitions, protest, and call their representatives all to get Lexi back in their care. Speaking with Fox 11, Rusty Page said:

Lexi doesn't know another home. She finally knows what mom and dad means and they want to take that away from her. And we can't stand idly by while that happens. As hard as it is, and as scary as it is to go up against the people we going up against, we're putting everything on the line. A mom is not going to sit back, a dad is not going to sit back. We're going to fight until the very end.

The Pages also asked friends, family, and fans to pray for them. While little is known about their lives outsiding of this consuming ordeal, it's clear that they are a religious couple. In a recent Facebook post, Rusty Page thanked his supporters, saying, "We have been so blessed to have people we know and people we don't know show up in person and in spirit today. We are so grateful to know that our supporters will be here through the night for Lexi and more are on their way!''

During a press conference, Rusty Page elaborated on the hurt he claimed the Choctaw Nation and the County of Los Angeles was inflicting on his family. Summer Page stood by, but did not speak or raise her downcast eyes. Since the scream she let out when Lexi was taken away, she has not addressed the media, and instead appears almost catatonic. Rusty Page said, "The terror our daughter has been put through is unforgivable."

According to LinkedIn, Rusty Page is the Senior Director of Global Operations and Quality at Bioness, Inc., which "develops and manufactures unique innovative systems for rehabilitation of impairments resulting from central nervous system disorders." Listed under his interests is "Foster care." The situation is clearly complex and extremely controversial, but in the defense of the ruling, the foster care system is set up explicitly to provide a temporary home for a child until she can be reunited with family. Lexi can now have that reunion. The Pages have countered, of course, that they are Lexi's family.