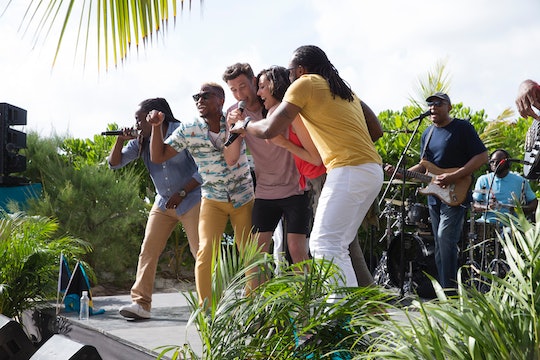 The Baha Men Are Back On 'The Bachelorette'

The Bachelorette is all about finding a soulmate for Becca. But it's also about bringing in musicians for super awkward one-on-one date scenes. This season's musical guests have been particularly good — Lil' John showed up to help Becca smash things and Wayne Newton helped her dates write love songs to her. Being in the Bahamas, the producers could have gone in so many directions for the musical guest this week, but they decided on the Baha Men, naturally. Just in case the name doesn't ring a bell, who are the Baha Men anyway?

You definitely know who the Baha Men are, even if you don't think you do. The group formed in the Bahamas back in the 1980s and they have 12 studio albums. But they're most known for the classic hit, "Who Let The Dogs Out," the song that will just never go away. According to Vice, though, the band actually can't remember all of the words to the song, though they still perform it on stage for fans.

Though now iconic, the song almost didn't happen, according to the band members. They told Vice that the song was "originally sung by a Trinidadian artist whose name is Anslem Douglas. The manager of the Baha Men at that time heard a version of the song in Europe. He called Isaiah [Taylor, a band member] and told him it was an absolute must that Baha Men record that song, because they had the vibe to make it a huge hit."

Once they heard the song, they realized there was no way they couldn't sing it. And the rest, as they say, is history.

But they're really over the single these days. Taylor added in the same Vice interview, "I'm very tired of playing that song in rehearsal. I mean, we've been playing it for almost as long as I've been alive. But on stage, it's different. The fans really give life to that song." And they really don't know the words to it. Taylor added:

Leroy Butler sings the rap part in the song now, and no matter how much I hear him sing that part, I can't sing it. Marvin, the ex-member with blond hair, originally wrote the rap, so he's the only one who knows what the words are. Leroy sings what he thinks it is, but I know that what he's singing doesn't make sense.

So if you watch closely when they perform the song on The Bachelorette (because you know they're making Becca and Blake singalong), try to see if anyone on the stage has any idea of what they're saying.

They have made albums since taking home the Grammy for "Who Let The Dogs Out," and you can tell that they want people to know that they're not just one hit wonders. Band member Rik Carey told SongFacts.com:

We are real, authentic musicians. There's not one person in the group that does not know how to play at least one instrument, so that keeps us grounded and it keeps us creative. We try to instill our culture — which is junkanoo — into almost every song we produce because it's a part of us and we feel like there's not a sound out there like what we've done.

So maybe it's worth digging into the Baha Men's discography and learn some of their other singles. Going on The Bachelorette is definitely a good way to get new fans, which is something all of the band members want. Carey told All Access, "I want for the new listeners to understand and feel our music, to be inspired and moved by this new sound that we bring from my home the Bahamas to the world. It’s a huge part of who we are as a people and we want to share that with all of our fans."

You hear that, Bachelor Nation? The Baha Men are about more than "Who Let The Dogs Out." Hopefully Blake and Becca are ready for them.