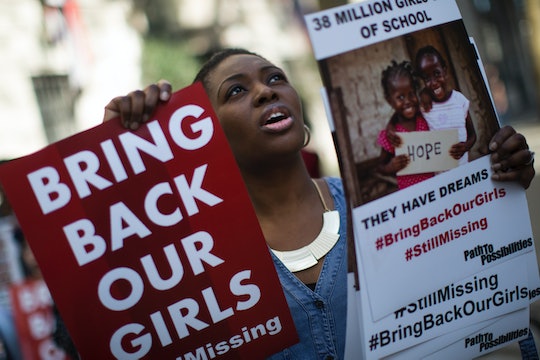 'Stolen Daughters' Explores The Aftermath Of The Chibok Girls' Kidnapping

The documentary Stolen Daughters: Kidnapped by Boko Haram, which premieres on HBO on Oct. 22, takes a closer look at the abduction of over two hundred Nigerian schoolgirls by the terrorist group Boko Haram in 2014. A viral campaign drew the world's attention to the case, with signs and hashtags demanding that the Nigerian government do everything they could to #BringBackOurGirls. If you don't know who the "Chibok girls" are, then Stolen Daughters will take you through the entire story from the beginning.

On Apr. 14, 2014, 276 girls were taken from a boarding school in the village of Chibok. They were there to sit their final exams, according to the BBC; the town had not been targeted before, so it was thought to be safe. At the time, a Chibok resident named Maina Babagana explained to CNN that the Boko Haram attackers came to town around 9 p.m. and went directly to the school. They killed two soldiers guarding the school, set fire to buildings in town, and loaded the girls up into vans.

Some girls were able to escape when the van broke down and they were taken into different vehicles. One unnamed student shared her account of that night with CNN, saying, "They forced us into trucks, buses and vans, some of which were carrying food stuffs and petrol. They left with us in a convoy into the bush. A group of motorcyclists flanked the convoy to ensure none of us escaped." However, when the trucks broke down again, "some of us jumped out of the vehicles and ran into the bush. We later found our way back to Chibok."

The missing girls' parents immediately tried to take action, as depicted in a clip from Stolen Daughters made available on YouTube. They gathered what weapons they could and followed the trail left behind all the way to the Sambisa forest. But once there, they were told that they would be killed upon entering and then there would be no one to fight for their children.

The girls remained in captivity in the Sambisa forest for years, though over time the government was able to negotiate the return of 102 of them; 112 remain missing, and many may have been killed. The women who have returned were placed in protective custody by the government where they received counseling and education. One girl, Hauwa Ntakai, told the New York Times that she was happy now, but, "I'm thinking about my sisters who are still in the back."

There were thousands who had been impacted by Boko Haram since 2009, with many children taken and millions of people displaced. Saudatu Mahdi, a co-founder of the Bring Back Our Girls movement, explained to the New York Times, "When the Chibok abduction happened, it was the articulation of this whole saga. They became a rallying point."

Stolen Daughters follows the rescued Chibok girls as they readjust to their lives, but also the "forgotten girls" — young girls abducted from the town of Maiduguri who managed to escape, but didn't receive as much government support as the Chibok girls did. Stolen Daughters promises to explore multiple angles of the story, which is far from over.