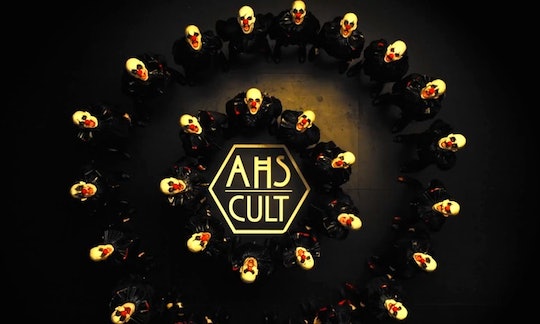 The Clowns May Be Working For Kai On 'AHS: Cult'

Clowns have been a big part of American Horror Story Season 7 since promotion for the new season began, and the same holds true for the premiere episode. Whether it was the return of Season 4's Twisty the Clown or Evan Peters painting his face with Cheetos, clown imagery was all over "Election Night." Protagonist Ally Mayfair-Richards suffered from coulrophobia (fear of clowns), which also led to hallucinations of a gang of grotesque clowns who terrorized her in otherwise normal surroundings. But who are the clowns on American Horror Story: Cult?

So far that mystery remains unsolved. It's not even clear whether the clowns are real or not, and their identities are concealed behind makeup or masks. If they're truly figments of Ally's imagination, then it may not matter who they are; they're just here to give voice to the horrors in Ally's mind. However, there was a clue that they were real — and if they were, then they could be important as the season unfolds.

While the clowns were mostly shown harassing Ally, they did make one appearance that wasn't filtered through her point of view. Her son Ozzy spied on the clowns while they were murdering the Mayfair-Richards' neighbors, the Changs. That could be evidence that the clowns were real, but still doesn't explain who they are or what exactly it is that they want.

The clowns might have a connection to the season's lead antagonist Kai Anderson, provided they're not just living inside Ally's head. Kai is primed to become a cult leader as the season progresses, and the clowns could be his followers. They do have a habit of taking on people Kai seems to have an issue with. Mr. Chang was killed by the clowns after he embarrassed Kai at a city council meeting and there are hints that Kai might have some kind of a fixation with Ally.

Though any indication of that is subtle at the moment, there were signs. Kai splashed hot coffee on Ally in the street. He also may have been the one to send his sister Winter into the Mayfair-Richards household to become Ozzy's new nanny. There's a chance Kai is sending his clowns in after Ally even if his motives for doing so are unclear.

But even if the clowns are Kai's followers, that doesn't tell the audience much about who they are and why they decided to glom onto Kai's "chaos is a ladder" philosophy. Those reveals will have to wait until later in the season — if they come at all.