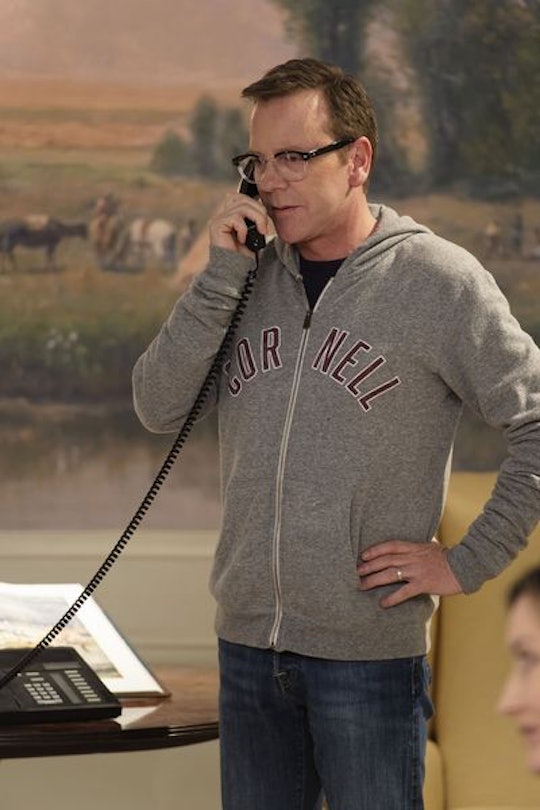 Who Are The Designated Survivors? The New ABC Drama Is Based On Real Life Security

Kiefer Sutherland's return to network primetime is slated for Wednesday, September 21st when he stars as the titular character in ABC's Designated Survivor. Sutherland plays Tom Kirkman, the United States Secretary of Housing and Urban Development, who, during the State of the Union, gets to hang out in an undisclosed location in sweats since he's been chosen as the administration's "designated survivor" — actually a real security measure taken by the United States when its political leaders gather in one location. You can guess what happens next from the heavily circulated trailer. But who are the designated survivors?

Usually, it's a cabinet member who spends large-scale events like the State of the Union or presidential inaugurations in a remote, secure, undisclosed location under the protection of Secret Service, in case an attack is waged at an event where the President, Vice President, Secretary of State, and other leaders in the presidential line of succession are gathered. In Designated Survivor, the event is the State of the Union address, and an attack on the Capitol Building sends it up in flames and leaves it in rubble. Congress members in attendance, the Cabinet, and the President all die, leaving Kirkman to ascend the presidency from the non-elected position of Secretary of Housing and Urban Development.

This is actually well within the realm of possibility. While the official line of presidential succession goes President, Vice President, Speaker of the House, President pro tempore of the Senate (ie., the Senate's second-in-command after the Vice President), and then Secretary of State, followed by the rest of the cabinet, the designated survivor during the State of the Union is usually a lower ranking cabinet member. In 2010, Secretary of Housing and Urban Development Shaun Donovan was the designated survivor of the State of the Union address.

Mic broke down the history of how a designated survivor gets chosen and when the information is released (surprisingly, in the modern era, the person is openly announced before the State of the Union address):

"According to the Senate Historical Office, the practice began 'at least' at the height of the Cold War in the early 1960s, but may have started even earlier. It wasn't until the 1980s that the White House started publicly disclosing the identity of the designated survivor. The White House chief of staff makes the selection in the weeks leading up to the speech, but the pick isn't announced until right before the address."

And, for one last horrifying historical tidbit, the designated survivor is typically accompanied by an aide — usually a military official — carrying a "nuclear football," or a briefcase equipped with nuclear codes to deploy weapons on the go in the event of an attack. We'll have to wait and see if that particular detail makes it to TV, but Designated Survivor is already bucking the norm a little bit — designated survivors are usually stashed outside of Washington, DC in real life, but in the trailer, we see Kiefer Sutherland raise the blinds in his holding room to see the burning Capitol in the distance immediately after the attack. It's probably safer to be a liiittle farther away from the action than that.