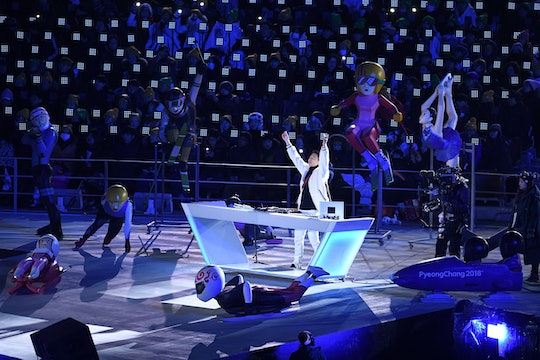 Who Are The DJs At The Closing Ceremony? They Turned It Into A Huge Dance Party

Two non-athletes brought the the 2018 Winter Olympic Games in PyeongChang, South Korea to life during the closing ceremony, and social media users are now asking, who are the DJs at the closing ceremony? The answer is DJ Raiden and Martin Garrix, and here's what you should know about them.

DJ Raiden tweeted last week letting followers know that he'd be making an appearance in PyeongChang — and that he felt "very honoured to represent [his] country and [appreciates] everyone who made this happen besides [him]." His followers seemed excited for him, as many took to the social media platform to congratulate him.

Martin Garrix then followed DJ Raiden. He announced his high-profile appearance via Instagram on Saturday when he posted about how grateful he felt to get to close the Olympics. He even recalled watching the 2004 Olympics when Tiesto opened the event, and he said that the 2004 opening had inspired him to do what he does today: DJing, evidently in front of the entire world. "Being part of the closing ceremony tomorrow, I can only hope and dream that I can inspire someone the same way he did," he added. "Life is crazy."

Life is wild, and so was the crowd of athletes who swarmed the stage area and broke out into a dance party at the end of the ceremony.

Raiden, for one, is a DJ and producer from South Korea, according to his bio page. He has performed in festivals in all corners of the globe spanning Ultra Music Festival, World DJ Festival, and Life In Color Ibiza. He's shared the same stage with renowned DJs such as Tiesto, Hardwell, ZEDD, Alesso, Fedde Le Grand, BoysNoize, Skrillex, DJ Snake, and more. And he has toured everywhere from New York, Miami, Ibiza, and Split (Croatia), to Tokyo, Taipei, Bali, and Jakarta. And now, of course, PyeongChang, where he just took stage before the best athletes, global leaders, and viewers across the world.

At home in Seoul, Raiden is a resident DJ at Club Octagon, and his track with Bright Lights titled "Heart Of Steel" was chosen and featured in the Ultra Korea 2015 After Movie. If you're wondering how he got to be so successful, well, it's probably because he's a trained guitarist with an ear for music, according to his bio page.

And Martin Garrix is EDM's youngest superstar, according to his bio page. He's topped global charts, has sold multi-platinum records, and has headlined festival main stages worldwide. And, now, he has also closed out the 2018 Winter Olympic Games. Fans of his music recognize him for songs like "So Far Away" and "Like I Do" with famed DJ David Guetta.

Twitter users are in a bit of a frenzy over Garrix's appearance...

You can find upcoming events with DJ Raiden on his Facebook page. His next event, according to his Facebook profile, is DON'T LET DADDY KNOW (#DLDK) in the Ziggo Dome in Amsterdam. In case you're wondering what that actually is, you can head on over to YouTube to check out the aftermovie of #DLDK Amsterdam 2017.

And Garrix will also be at the Global Awards 2018 on March 1, and the ISY Sanya International Music Festival on March 3 — but he's got a whole list of tour dates, so you can follow him around the world after PyeongChang to Las Vegas, Vienna, Frankfurt, Stockholm, and more.

More Like This
Disney World Closes For 2 Days Due To Hurricane Ian
Gabrielle Union Admits She May Be Becoming A Bit Of A Dance Mom With 3-Year-Old Kaavia
Is The Hatch Baby Sound Machine Worth It? This New Mom Says Yes.
Hocus Pocus Party Inspiration To Put A Spell On Your Guests