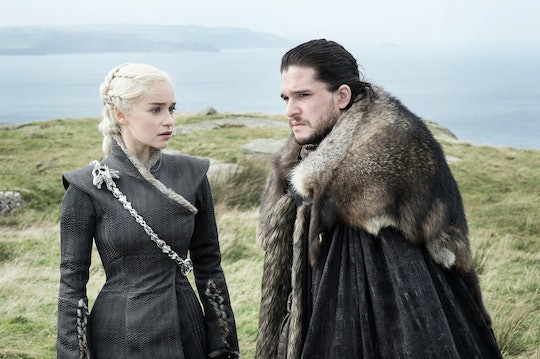 The second to last season of Game of Thrones is about to come to an end, and the title of the Season 7 finale has been revealed. The title, "The Dragon and the Wolf," has many fans theorizing what will happen in the episode, but the biggest question that needs to be answered is who are the dragon and the wolf on Game of Thrones? While most people believe it's Daenerys Targaryen and Jon Snow, others have a different idea of who it might be referencing.

Each house in the world of Westeros has an animal, or mythical creature, attached to it. House Stark is the direwolves and the Targaryens are, of course, dragons. Therefore, it'd make sense the wolf in the title is Jon and the dragon is Daenerys. However, it's also possible the title is connected to Jon's birth parents. At the end of Season 6, it was finally confirmed that Jon's mother is actually Lyanna Stark, and this revelation all but confirmed that his father is Daenerys' brother, Rhaegar. Therefore, many believe the finale title actually refers to Lyanna (the wolf) and Rhaegar (the dragon), and that the finale will treat fans to another flashback, this time to Rhaegar and Lyanna's wedding.

Earlier this season, Gilly briefly mentioned a "Prince Raggar," to Sam, who was too busy complaining about his awful job to truly appreciate what Gilly was discovering. Gilly asked Sam what an annulment was because Rhaegar apparently got one before he got remarried in a ceremony in Dorne, which just so happens to be where the Tower of Joy is located. Most fans agree that this was confirmation Rhaegar and Lyanna secretly got married, therefore making Jon not only a Targaryen, but a legitimate heir to the throne.

People became even more certain there will be a flashback in the finale when speculation about actor Wilf Scolding playing the role of Rhaegar began circling. However, the only proof that this is actually true is the fact that Aisling Franciosi, who plays Lyanna, started following Scolding on Twitter when GOT was in production in September. Additionally, Scolding does look like he could be a Targaryen.

Even though there's been no confirmation, which isn't really surprising since the show likes to keep things under wraps, fans are now more certain than ever that they'll finally get to see Rhaegar on screen. But besides confirming what most people already believe, what does this flashback really mean for the characters on the show? Will Jon finally discover the truth about who he is, and more importantly, who he's related to? If so, this will definitely throw a wrench in his budding romance with Daenerys. Then again, they are Targaryens; they're into that kind of thing.