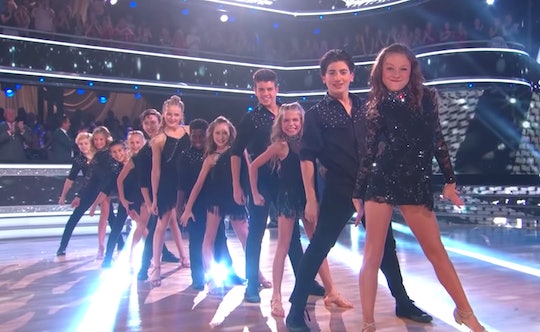 As it turns out, yes there are — and their dance skills rival that of the adult professional dancers who have been on the show for years. The first season of Juniors will feature 12 "stars" (aka mildly famous children), who are each paired up with a professional child dancer. Additionally, every duo will have an adult mentor, each of whom has served as either a pro dancer or a troupe dancer on Dancing with the Stars, according to CNN.

So without further ado, here are the 12 Dancing with the Stars: Juniors pros!

Artyon has been a professional dancer since he was just 8 years old, with a background in every dance style as well as gymnastics, according to ABC. He is partnered with Ariana Greenblatt, best known for her role in Avengers: Infinity War, and their mentor is Brandon Armstrong.

At just 12 years old, Brightyn already has plenty of dance reality show experience. She was in the top 30 on So You Think You Can Dance, and she has also appeared on World of Dance and America's Got Talent, according to her ABC bio. Her partner is Mandla Morris, a fashion designer and Stevie Wonder's son, and their mentor is Cheryl Burke, according to Access Hollywood.

In addition to winning multiple dance awards, Elliana has also performed off-Broadway, she was on Dance Moms, and she has worked as an actress, a singer, and a model, as per her ABC bio and Instagram bio. Her partner is Jason Maybaum from Raven's Home, and their mentor is Emma Slater.

Hailey is a professional dancer in her own right, but she also has a pretty awesome connection with the Dancing with the Stars universe: her aunt is Jenna Johnson, who won Dancing with the Stars: Athletes along with partner Adam Rippon, according to their intro video on YouTube. Hailey's partner is Tripp Johnston, who is Sarah Palin's grandson and Bristol Palin's son. Johnson is serving as the young duo's mentor — hopefully she's not too hard on her niece.

Jake should be pretty comfortable on camera, considering he has been on So You Think You Can Dance: The Next Generation and Nickelodeon's Lip Sync Battle Shorties, according to his bio on ABC's website. He's paired with Sophia Pippen, daughter of basketball player Scottie Pippen and Larsa Pippen, CNN reported.

JT came in second place on So You Think You Can Dance: The Next Generation, and he's also appeared on several other shows, including Lip Sync Battle Shorties and CMA Country Christmas, as per his ABC bio. He's partnered with professional skateboarder Sky Brown, and their mentor is Alan Bersten.

Kameron, a dancer and gymnast, was declared a top 10 best dancer at Radix Nationals, and a top 20 best dancer at The Dance Awards, according to ABC. Nice! She is partnered with actor Hudson West, who has been on shows including General Hospital, Grace and Frankie, Grey’s Anatomy, and Modern Family, People reported. Hayley Erbert is mentoring the young duo.

With a smile that goes on for miles, Kamri is sure to bring plenty of joy to Juniors. She is an accomplished professional dancer, and she represented the USA at the Open World Championships in Paris, France, her ABC bio noted. Kamri will be dancing alongside Akash Vukoti, who is the youngest boy in history to make it in Scripps National Spelling Bee, E! News reported. Their mentor is Witney Carson.

Like many of his fellow pro dancers, Lev has been on So You Think You Can Dance: The Next Generation, as per ABC. Additionally, he was in Justin Timberlake's "Can't Stop The Feeling!" music video. His partner is Addison Osta Smith, who, at the age of 10, was the youngest contestant and very first girl to win Masterchef Junior, E! News reported. Keo Motsepe is mentoring the pair.

Dance skills must run in the Arnold family. Rylee is the younger sister of Dancing with the Stars pro Lindsay Arnold, who is actually serving as her mentor on Juniors, ABC noted. Rylee, whose specialty is Latin ballroom, is partnered with Miles Brown, who is best known for playing Jack Johnson on black-ish, according to Deadline.

Sage has plenty of experience performing for big crowds. He has performed with singers including Justin Bieber, Sia, Usher, and Mariah Carey, and he is a three-time National Dance Champion, according to his bio on ABC's website. Sage is partnered up with Mackenzie Ziegler, the younger sister of dancer Maddie Ziegler, both of whom appeared on Dance Moms, Us Weekly noted. Gleb Savchenko is mentoring the duo.

And last but not least, there's Tristan, who hails from Toronto. As a competitive dancer, Tristan was named the Mini Male Best Dancer in 2015 and Junior Male Best Dancer in 2017, according to ABC. His partner is one of the best known stars this season: Alana Thompson, aka Honey Boo Boo. The pair's mentor is pro Artem Chigvintsev.

If you're still reading this, you'd probably be interested to know that Dancing with the Stars: Juniors will premiere on Sunday, Oct. 7 at 8p.m. ET on ABC. I personally can't wait to watch how incredibly talented all these child dancers are — and subsequently feel bad about myself because I have two left feet.