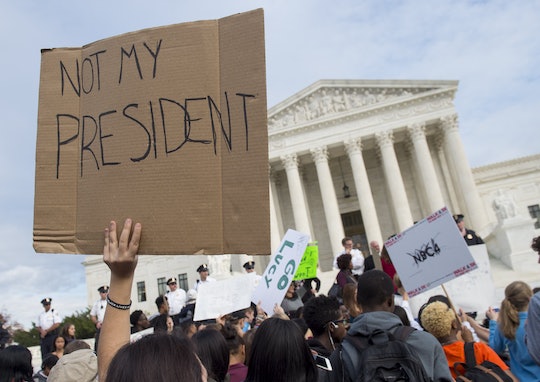 Who Are The "Faithless" Electors? Many Americans Are Hoping They'll Stop Trump

On Dec. 19th, Electoral College members will cast their votes for the president of the United States. The day would pass by quietly most election years. But for this presidential election, the day is gaining attention because some electoral college members are taking a chance to speak out against president-elect Donald Trump by voting for someone other than the candidate nominated by their state's population. These people are known as the "faithless" electors — but who are they?

Trump has 306 electoral votes, which means that 37 electors would need to flip their vote to bring Trump below the 270 votes needed to win in order for the decision to go to the House of Representatives.

The decision to vote against the candidate chosen by a state isn't a light matter: in 29 states and D.C., state law requires electors to vote for the candidate that wins that state's popular vote, according to FairVote.

Christopher Suprun, of Texas, is the first Republican elector to announce he will not vote for Trump.

"...an Electoral College should determine if candidates are qualified, not engaged in demagogy, and independent from foreign influence,” Suprun told the UK's Independent. “Mr. Trump shows us again and again that he does not meet these standards." He added that “the election of the next president is not yet a done deal.”

On the Democratic side of things, graduate student Michael Baca is among four of Colorado's electors who have pledged to stand against Trump.

“The biggest criticism we’ve gotten so far is along the lines of, ‘The people have spoken, why don’t you go with the people?’ But if we did that, then Clinton would be the president,” Baca said in an interview with The Atlantic.

The other electors in Colorado joining Baca are Jerad Sutton, Bob Nemanich, and Polly Baca (no relation to Michael Baca).

The way Democratic electors can vote against Trump is to write in an alternative Republican instead of voting for Hillary Clinton, which is what Washington electoral college member Levi Guerra will do. "I promised those who elected me that I would do everything I could to ensure Donald Trump does not become our president," Guerra said at a press conference.

The Guardian reported that Guerra hopes these protest votes will encourage Republican electors to follow the lead of the "Hamilton Electors" by voting against Trump. “I’m only 19 and this is my first time being involved in politics, but I hope that my willingness to put my country before my party will show that my generation cares about all Americans,” Guerra told The Guardian.

Also among the Hamilton electors who are dedicated to keeping Trump out of office is Washington state elector Bret Chaifolo. “We’re trying to be that ‘break in case of emergency’ fire hose that’s gotten dusty over the last 200 years,” Chaifolo told The Atlantic. “This is an emergency.”

It's hard to pin down how many "faithless electors" there are, but the Hamilton Electors' website shows that 21 electors have promised to vote against Trump so far, though it's unclear how many of these electors are in Republican states.

But don't expect an upset: as NPR reported, most electors stay in line with their party's nominations, and even in a political race as contentious as this one has been, that's likely not going to change. "People voting for Trump wanted his associated electors to vote for him," Rob Ritchie of FairVote told NPR. "Same with people voting for Clinton. So expecting them to act against that mandate now is a highly questionable position."

And even if enough electors do flip the script, Congress could (and likely would) simply choose to make Trump the president anyway because its Republican-dominated.