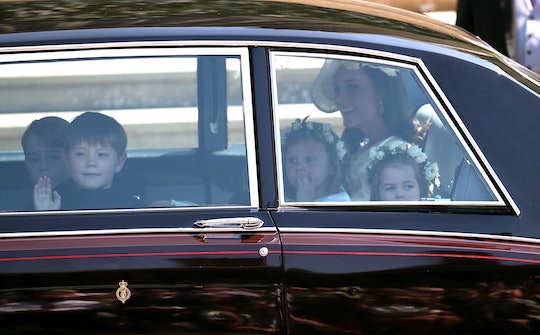 Meet The Adorable Bridesmaids At The Royal Wedding

As we watched the wedding between Meghan Markle and Prince Harry, no one shined brighter than the bride. But given how cute the little girls were, you couldn't help but get distracted by them as they walked down the aisle. Looking absolutely adorable in their matching dresses, the girls added a sweetness to the very official, pomp-filled occasion. They're also pretty lucky to have been a part of a wedding that was broadcast throughout the world. So who were the flower girls at the royal wedding and how did Meghan and Prince Harry select them?

Despite being an official royal occasion, it was also a very personal one and Meghan and Prince Harry's flower girl choices reflect that. They've gone to their closest peeps, including nieces and the children of their closest friends to select the 10-member wedding party. This included six bridesmaids and four page boys. Although they are all young children, they actually aren't referred to as flower girls, but as bridesmaids. And since these bridesmaids are all kids, which according to Bustle is the tradition in the UK, there weren't any complaints like you get when you pick your best girlfriends and no one thinks they look good in peach taffeta. With the oldest bridesmaid being seven and several of them being toddlers, the wedding party was an overdose of cuteness.

It certainly wasn't a surprise to see Princess Charlotte there at her uncle's wedding. After her precious wave to the crowd last month when she went to pick up her new baby brother, Prince Louis, it's clear she's comfortable in front of an audience and knows how to work it. She's also "been there, done that" after being a flower girl for her Aunt Pippa's wedding. Charlotte's life is going to be lived out in front of the British people, so even though she's only three, she's getting used to it. Because Charlotte's mom, Duchess Kate, isn't in the wedding, she was able to help out and manage the kids. She left Prince Louis home, so she was able to focus on Charlotte and her brother George, who was one of the page boys.

The other little girls weren't super well known before the wedding, as they aren't part of the royal family. Ivy Mulroney is four and the daughter of one of Meghan's best buddies, Jessica, as well as the granddaughter of former Canadian Prime Minister Brian Mulroney, according to Page Six. Jessica was the perfect friend to have when planning a wedding, as she's a stylist and bridal expert, according to Vanity Fair. Ivy's brothers, Brian and John are both seven and were page boys along with Prince George. A fourth boy, Prince Harry's friend Mark Dyer's son Jasper, rounded out the page boy posse.

Goddaughters were the easy go-to for both Meghan and Prince Harry in their bridesmaid choices. Three-year-old Florence van Cutsem might have looked familiar, as not only is she Prince Harry's goddaughter and daughter of his friend Nicolas van Cutsem, but she's also the cousin of the frowning bridesmaid, "Grumpy" Grace van Cutsem, who caught everyone's attention when she was making faces and covering her ears to block out the noise at Prince William and Duchess Kate's wedding, as The Sun reminded us. The littlest bridesmaid, Zalie Warren, is only two and also one of Harry's goddaughters. She's the daughter of Harry's friend from Eton, Jake Warren.

Meghan's goddaughters, Rylan and Remi Litt, were also included in the ceremony. Rylan and Remi are six and seven and are the daughters of Meghan's very close friend from California, Benita. Vanity Fair said that Meghan referred to Rylan and Remi as her "fairy goddaughters" and dressed as bridesmaids for their godmom's wedding, they probably felt like princesses.

Although some of these kids are too young to remember this day, it's been immortalized in video and pictures and the eyes of the world were watching live. It'll be an experience their families will be talking about for years to come.