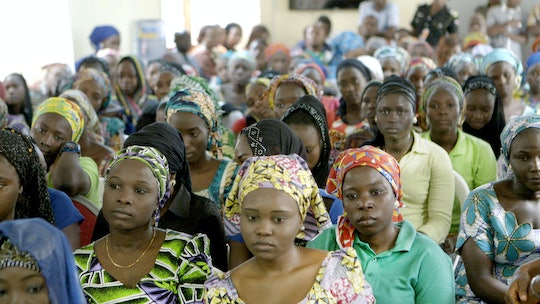 The "Forgotten Girls" Tell Their Stories In HBO's 'Stolen Daughters'

Stolen Daughters: Kidnapped by Boko Haram tells the story of the 276 Nigerian girls who were abducted from their school in Chibok in 2014. They were taken by the terrorist group Boko Haram and spent years in captivity while the social media campaign #BringBackOurGirls brought increased international attention to the case. Negotiations led to 103 of the girls being freed. But their experience upon returning differed greatly from other victims of Boko Haram who have been deemed the "forgotten girls." And it's important to know who the forgotten girls are.

When Stolen Daughters premieres on HBO on Oct. 22, it will focus on both the Chibok girls and the forgotten girls. The city of Maiduguri was repeatedly targeted by Boko Haram, leading to the abduction of thousands of women and girls. Some were able to escape from the Sambisa forest where they were held, often for years, but their return home was not what they expected. They were often treated with suspicion and could not reintegrate with their families, struggling to recover and survive in the aftermath of their extreme trauma. Because they did not receive the same media attention or government support that the Chibok girls did, the women of Maiduguri have been referred to as the "forgotten girls."

Boko Haram has been active in Nigeria since 2002, though CNN reported that the group may have formed as early as the late 1990s. Since 2009, they have killed over 20,000 people in Nigeria and displaced over two million. They have kidnapped thousands of young men and women, often targeting schools because they are against women being educated, according to CNN. One of their goals is to institute Sharia law.

Upon their return, the Chibok girls were put under protection and had limited contact with the outside world. They received education and counseling, per HBO's synopsis for Stolen Daughters. Eventually, they were able to take part in a government-funded program at the American University of Nigeria. The "forgotten girls," however, did not receive the same opportunities.

The forgotten girls live in refugee camps or slums, unable to afford the kind of help they need and relying on the support of aid groups, according to The Guardian. People in their communities, including their own family members in some cases, worry that the girls were radicalized by their time as prisoners. Stolen Daughters producer Sasha Joelle Achilli told The Guardian:

The community in Maiduguri has been really stoic in opening up their doors to refugees and providing shelter. There's a bit of both: there's the fear and stigma attached to the people who have been living with Boko Haram and there's also just great openness and generosity to help the other.

In 2017, the LA Times interviewed a 17-year-old girl named Amina who had been kidnapped by Boko Haram when she was only 13. She was married to a militant and beaten publicly when she would not sleep with him; after recovering from the attack, she became pregnant twice, though her eldest son died when he was just a year old. She was able to escape with her second baby and a friend, spending days on the run before arriving at a village where both girls were suspected of being suicide bombers.

They were eventually taken to a camp and Amina was reunited with her family, but like the other forgotten girls, it didn't go how she imagined. People were wary of her, and her stepfather moved out of their home because he was afraid she would kill him. She went back to the camp, telling the LA Times, "I don't want to stay in the camp, but I have no choice. But any troubles I might go through now are not equivalent to what I already went through with Boko Haram."

Amina is one of many women and men who have suffered because of Boko Haram, as are the Chibok girls. Stolen Daughters aims to shed some light not only on the story that received so much media attention, but on stories that may have been forgotten.