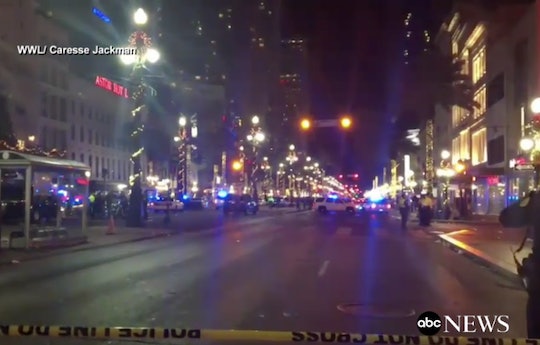 Who Are The French Quarter Shooting Victims? Arrests Have Been Made

Police are working to determine a motive and to outline the circumstances that led to the shooting of 10 people, one of them fatally, in New Orleans' French Quarter early Sunday morning. Two suspects have been arrested at the scene of the incident, which happened despite increased police presence in the area, but their names, as well as those of the French Quarter shooting victims, have not yet been released. ABC News reported that eight of those shot were men, and two were women, all between 20 and 37 years old. It was one of the men who ultimately died.

The shots punctured the crowded French Quarter on an intersection on its famous Bourbon Street — which is known for its vibrant nightlife scene — at around 1:30 a.m. local time Sunday, according to NBC News. Soon after, the New Orleans Police Department announced that it had made two related arrests, both for carrying a firearm illegally, and that one of those arrested was also an victim injured in the shooting. The other is not believed to have been involved in the shooting, according to NBC affiliate WDSU News.

The shots ripped through the celebrations after the Bayou Classic, a high-profile annual college football game, that attracted more than 30 police officers to the block to keep order and ensure public safety. Still, even the officers' presence tragically could not stop the incident, which New Orleans Police Chief Michael S. Harrison called "not something that should have happened" when talking with reporters.

Harrison also said that in the 24 hours before the shooting, police arrested eight other individuals on firearms-related charges in "proactive efforts." "So we've made a strong message that this was not the place or time to bring firearms to this French Quarter during the Bayou Classic event, or any event," he said. "We've made that very clear, and we're going to pursue this to the fullest extent of the law."

News of the mass shooting so soon after Thanksgiving catapulted some back to a tragically similar incident that happened in June 2014 — one that also shattered the normally revelatory atmosphere of Bourbon Street, one that also left one dead and nine wounded. Amy Matthews, an Australian tourist and then-21-year-old bystander who suffered extensive injuries after being shot told Times-Picayune reporter Ken Daley that this latest incident "highlights [the United States'] national issue with gun laws."

Matthews, who endured a gunshot through her cheek and mouth that destroyed her upper palate and all but 10 of her teeth and has been diagnosed with post-traumatic stress disorder, told The Times-Picayune that the news of a similar shooting was "terrible" and described the lasting effect the incident has had on her at the trial for one of the shooters in January:

It scared me to leave the house for months I couldn't work, I couldn't read, I couldn't really concentrate on anything but maybe watching TV. I had to be put on medications to help me sleep and to get through the day.

Considering Matthews' devastating experience and the country-wide problem with mass shootings, it's heartbreaking to think that nine more people will now suffer the effects of such a personal and national tragedy, and that one lost his life.