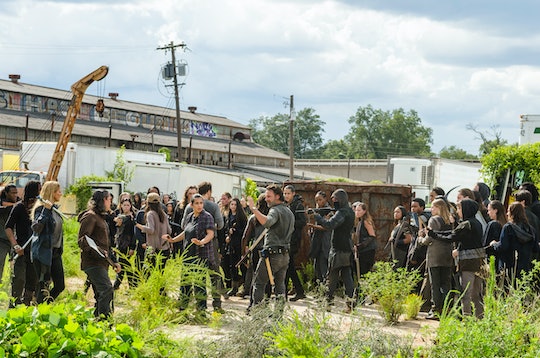 This New 'Walking Dead' Group Has An Odd Nickname

It seems like a new community is popping up every week on The Walking Dead. After years of relative isolation and run-ins with smaller groups or solitary characters, there are now a lot more players on the field. Each community has its own rules and regulations, as well as catchy names to remember them by — and presumably just in case they ever want to compete in a Battle of the Bands. Another new group emerged at the end of "Rock in the Road" and they may have already acquired their own distinctive nickname: the Garbage Pail Kids. But who are the Garbage Pail Kids on The Walking Dead?

One thing's for sure: there's no actual connection to their namesake — the 1980s trading cards that featured a purposefully gross twist on the popular and wholesome Cabbage Patch Kids. The original Garbage Pail Kids had pun-driven names accompanying helpful illustrations, like Meltin' Milton, whose face was little more than a pile of melted goo. But what does that have to do with The Walking Dead? (Warning: minor Walking Dead spoilers ahead!)

The colorful identifier originated on The Spoiling Dead as a way to keep track of the new group in filming pictures, and it seemed especially fitting because they appear to live in a junkyard. It's a fan nickname, not an official one, so it's more descriptive than it is informative. I wouldn't expect any of the new characters to have punny names that signify their uniquely weird abilities.

Details are scant on the new group, even when it comes to the filming pictures posted on The Spoiling Dead. These Garbage Pail Kids (GPK for short) are seen holding guns alongside Rick and his crew, which is pretty much all they did at the end of the premiere episode. The promo and title for the next episode, "New Best Friends," gives slightly more insight into the GPK, but not much.

It's clear the junkyard is their territory, so they're as at home in less glamorous locales as their namesakes were. A woman with an edgy haircut who might be their leader claims that they now own the Alexandrians' lives, which is when Rick launches into his anti-Savior spiel. It looks like Rick will be trying to make the GPK his allies, and filming pictures could prove that he succeeds — though of course there's no way to know how things will unfold in the actual episode.

The GPKs are not from the comics, which makes their presence on the show truly unpredictable. They could indeed be Rick's new best friends, or they could be yet another enemy on a long, long list.