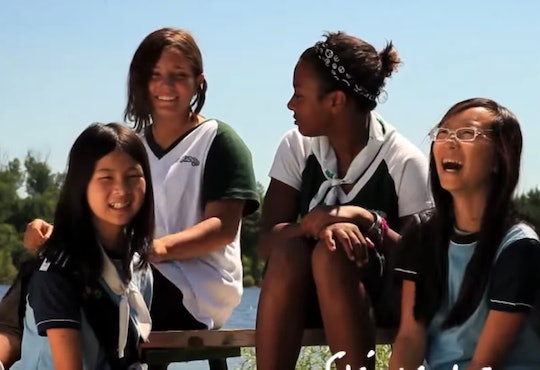 The Girl Guides Of Canada Won't Travel To The US

It looks like President Trump's latest travel ban will be keeping an unexpected group from visiting the United States: On Monday, the Girl Guides of Canada released a statement saying they would not be approving any trips to the United States until further notice. If you're unfamiliar with the group, you may be wondering: who are the Girl Guides of Canada, and exactly how does a travel ban on citizens from countries across the world affect them?

The Girl Guides are pretty much Canada's version of Girl Scouts: they're a national all-girl group who sell cookies, earn badges, go camping, and help out in their communities. They range from 5 to 17 years old, and they're not exactly the threatening "other" that some politicians seem determined to keep out of the United States at the moment. But according to a statement by the Girl Guides, the group will not be approving any new travel to the United States, since "the ability of all our members to equally enter this country is currently uncertain."

The Girl Guides didn't mention Trump's travel ban specifically, but the timing seems suspicious. Trump's new temporary ban will come into effect on Thursday, banning all nationals from Syria, Iran, Libya, Somalia, Sudan, and Yemen for 90 days, according to the BBC. Canada may not be on the list, but citizens from the affected countries could be living in Canada and affected by the ban — which is precisely why the Girl Guides decided to skip travel to the United States for the time being.

The reactions were mixed, to say the least.

Sarah Kiriliuk, national manager of marketing and communications for the Girl Guides of Canada, told the BBC that the move wasn't political. However, the organization didn't want any girls left behind on trips, and wanted its trips to reflect Girl Guides of Canada's "commitment to inclusivity and equal opportunities for all girls and women." Kiriliuk told NBC:

The United States' counterpart, Girl Scouts of the USA, drew fire when some participants marched in Trump's inauguration parade. Sylvia Acevedo, interim CEO of the organization, defended the Girl Scouts' decision in a TIME article at the time, writing:

We can no more turn our back on 75 girls who have chosen to participate in the inauguration than we can on the thousands across the country participating in the Women’s March on Washington the following day.

According to the BBC, several Canadian schools have also canceled trips to the United States in light of the travel ban, and Trump's first executive order on immigration was followed by a sharp drop in searches and bookings for American trips. It seems that the Girl Guides of Canada is just the latest unexpected group to react to the travel ban.