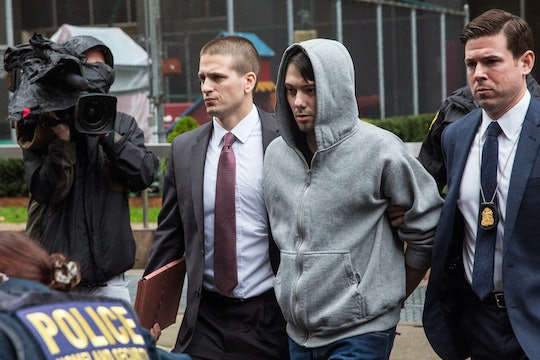 Who Are The Hot FBI Agents Who Arrested Shkreli? The Internet Wants To Know

I’ll be honest: I didn’t know hot FBI agents were a thing, at least not in real life. But when pharmaceutical CEO Martin Shkreli was arrested on charges of securities fraud early Thursday, I was shown how wrong I was. Since the arrest, the internet has been abuzz with chatter not about him but about the two men flanking the price-gauging businessman. It seems the old “uniforms are sexy” adage is true — if you think of an FBI agent's suit as a uniform — because all everyone wants to know is who are the hot FBI agents who arrested Shkreli?

While the fellas with chiseled jaws and tailored suits are obviously FBI agents — I mean, they are carrying out a cuffed Shkreli — the agents have yet to be identified. Coverage of the arrest describes them only as law enforcement officials. And given that they're, you know, FBI agents, I'm not sure they're at liberty to suddenly take to Twitter or Facebook and identify themselves. Can you imagine an FBI agent posting, "I know you've all been waiting for this announcement. My name is (HOT NAME), agent (OTHER HOT NAME) and I are the hot individuals who heroically arrested Martin Shkreli, and yes, we are single."

In the absence of actual information, curious minds turned to sussing out the agents' celeb doppelgängers. The Daily Dot pointed out that the the agent on the left looks like Wentworth Miller (from Prison Break) while the one on the right looks similar to Ed Helms and Chris Parnell, but it seems everyone on Twitter agrees: These guys are gorgeous.

Shkreli became a symbol of capitalist greed when he raised the price of a drug used to treat those with AIDS overnight, raising the price from $13.50 a pill to $750. But it turns out this isn’t illegal. What Shkreli was arrested for was what federal officials have described as a “quasi-Ponzi scheme in which he used money from his company to pay off money-losing investors in his hedge funds.” What a...winner.

Needless-to-say, let’s be thankful Shkreli’s antics may finally be coming to a close (and that we got to catch a glimpse of these two studly “men in black”).