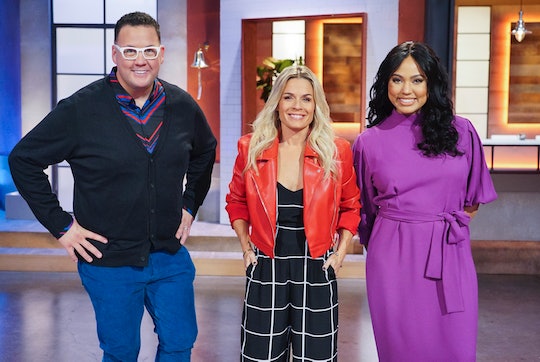 Get ready to kick off the summer with Ayesha Curry and her new ABC cooking show, Family Food Fight. The series premieres on Jun. 20, and will feature eight families who will compete with each other in a series of culinary challenges. After completing each task, the teams will present their dishes to a panel of celebrity chefs that may look familiar to some viewers. So, who are the judges on Family Food Fight?

As revealed by ABC in a press release, Curry will sit on the panel of judges, alongside world-renowned chefs, authors, restaurateurs and TV personalities Cat Cora and Graham Elliot. All three judges have years of culinary experience, and now they’re bringing their knowledge and expertise to Food Family Fight.

Curry is a chef, restaurateur, TV host, and New York Times best-selling author, according to her ABC Press bio. She started her career on Food Network, where she hosted her own show, Ayesha’s Home Kitchen. In 2016, Curry wrote a best-selling cookbook titled THe Seasoned Life, and since then she’s been featured on Forbes Magazine’s 30 Under 30 list, launched her own line of cookware, and opened a chain of restaurants called International Smoke. Curry is married to NBA star Stephen Curry, and is mom to their three kids, Riley, Ryan and Canon.

Joining Curry on the taste-testing panel is Cat Cora, a world-famous chef and TV host who made a splash as the first female Iron Chef on Food Network’s cooking competition show, Iron Chef America. As described by her ABC bio, Cora was the first woman to be inducted into the American Academy of Chefs Culinary Hall of Fame, and she’s been featured on a number of culinary TV shows, including My Kitchen Rules and Around the World in 80 Plates. Cora has opened over 18 restaurants around the world and in 2004 she started her nonprofit, Chefs for Humanity.

Graham Elliot, the third celebrity judge on the panel, is known for his acclaimed culinary career. As per his ABC bio, Elliot was the youngest four-star chef to named in the U.S. and his restaurant, Graham Elliot, is one of only 15 restaurants in the country that has earned two Michelin stars. You may recognize Elliot from MasterChef and MasterChef Jr, where he was a judge for 10 seasons, or from his appearances on Bravo’s cooking competition series, Top Chef.

The eight families competing this season are bringing their unique cultural heritage to the dishes they create. As the executive producer of Family Food Fight, Curry aims to highlight all kinds of families and their diverse cuisines. “It’s just this big melting pot of diversity and I think it’s a perfect representation of what America truly is,” she said when talking to USA Today. “The show is multi-generational, everything from brothers and sisters-in-law to a mom and her daughters to a mom and her sons, so many different combinations of what families look like.”

With all this star power and culinary diversity, Family Food Fight seems like a great summer watch for the whole family.