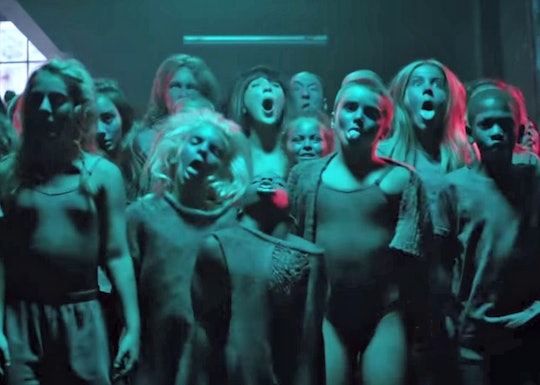 Who Are The Kids In Sia’s ‘The Greatest’ Video? They Paid Tribute To The Pulse Victims

Sia's video for "The Greatest" may be her most powerful piece yet. Though it's common for Sia to include dancers in her visual work, "The Greatest" invited dozens of children into a frenzy of movement and expression. Who are the kids in Sia's "The Greatest" video? They're present to make a powerful point.

Sia and Kendrick Lamar teamed up for "The Greatest," but according to USA Today, only Sia's part is included in the music video. The piece is reminiscent of Sia's past projects: think stunning choreography, striking sets, and plenty of symbolism. It also features Maddie Ziegler, the Dance Moms alum who skyrocketed to international attention after starring in Sia's "Chandelier" video; this is their fourth collaboration, not counting their many live performances and joint appearances.

"The Greatest" stands out by exchanging one or two featured performers for a group of young dancers. Those who worked on "The Greatest" indicated that there were 49; according to Vulture, they represent the 49 people killed by the June attack at Pulse nightclub. Symbols throughout the video for "The Greatest" hint at the meaning, from Ziegler's rainbow cheeks to a wall seemingly riddled with bullet holes, People reported.

16-year-old dancer Matt Moseley wrote about being a part of the project; People found his Instagram photo confirming the video's ties to the shooting in Orlando:

Humbled to be a part of this video. Thank you @siathisisacting. 49 beautiful lives lost. This is for you. 🌈 #WeAreYourChildren

Moseley tells Romper that he got an invite to audition, then found out he and all other male dancers would have to get buzz cuts. "One of the young female dancers actually shaved her head as well," he tells Romper. "That took a lot of strength!" Though Moseley worked with Ziegler before, "The Greatest" was his first project with Sia. The singer carefully cultivates a private persona, but Moseley says Sia was deeply engaged during his two days on set:

Sia was very hands on in the process, from making sure we were comfortable in the clothes we were wearing, to encouraging us from take to take. She's so very down to Earth, and involved in her entire video, even though she doesn't star in them.

Though Moseley has a lengthy resume as a dancer, actor, and recording artist, he says that working on Sia's video was a uniquely powerful experience:

The message behind it is so strong, and emotional. We all have lost or know someone that's lost someone from discrimination, and losing the people we love, from something as simple as loving who they love, is tragic to say the least.

Moseley says that all of the young performers embraced the opportunity to participate in such a moving project, but one final scene had specific emotional resonance:

The last take we did, where we all bounced around and then fell to the ground, was almost more powerful than anything that could have choreographed, and I think all the dancers were very emotional after that take.

Sia often communicates raw emotion and tells difficult stories through her work, but "The Greatest" stands alone as art created in the wake of tragedy. Watch the video here:

Most of the kids onscreen may be virtually anonymous, but perhaps not for long. Performing in "Chandelier" definitely changed Ziegler's life; the kids and teens who join her onscreen in "The Greatest" may find that their lives are about to change, too. But as Moseley said, the dancers' collaboration was bigger than themselves: "This video was for those 49 lives."