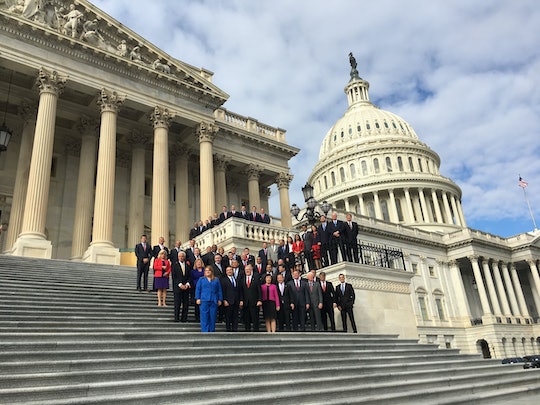 Who Are The New Minority Women In Congress?

The newly elected women of color in Congress are ready the challenges they may face. Take Nevada's Catherine Cortez Masto, for instance. Cortez Masto, now the first Latina to serve in the Senate, is ready to work, saying, "I look forward to using my voice." Adding to the Latina representation in Congress is Californian Nanette Diaz Barragan, who will represent Democrats in the 44th district.

Another voice to look forward to hearing? Illinois Senator Tammy Duckworth, an Asian-American Democrat and veteran who lost both of her legs serving in the Iraq War. Duckworth is perhaps best known for her incendiary Democratic National Convention speech this past summer, telling then-Republican presidential candidate Donald Trump: "You are not fit to be Commander-in-Chief."

The first ever Indian American Senator, Kamala Harris was sworn in as well, simultaneously becoming the first black woman sent to the Senate from California. In a similar vein, Lisa Blunt Rochester made history in her becoming the first woman and first African American to represent Delaware in Congress.

Stephanie Murphy is now the first Vietnamese-American female in Congress, representing Florida Democrats. A daughter of Vietnamese refugees, Murphy's desire to serve is deeply ingrained: "My parents always taught me freedom isn't free, and you pay back your debts," Murphy shared.

The first Indian-American woman elected to the House, Democrat Pramila Jayapal, is also wholly committed to her mission. Representing Washington, Jayapal will definitely fight for unity, saying in a recent statement, "We have been through some incredibly dark times in the history of country, and we have moved forward. It hasn't been as quickly as we want, but we are extremely powerful when we are united." Rounding out the list, African-American Val Demings will represent Florida. "It just means a lot to me — the daughter of a maid and a janitor who always believed their children could be more, do more," Demings shared.

Despite the perceived plateau in female representation in Congress, these women give a lot of hope regarding the possible changing nature of political representation for women of color. Their influence is paramount; Having an increased number of perspectives is absolutely key in facilitating a fair political system — a fight for which these women are absolutely up to the task.